All About Identity: To Find Meaning in Popular Tattoo Designs

Anyone who says that tattooing is not an art form is living in the past. Today, the discipline of tattooing is very much regarded as similar to the practice required of painters, which basically means that some level of artistry is demanded. Imagine how a tattoo artist is given the opportunity to claim one’s body as a blank canvas for art.And while this does ring true to some extent, how romanticized is this type of thinking, right?But a lot of teenagers and young adults, and even tattoo artists, see tattooing this way – and it isn’t wrong at all.In fact, it is this romanticizing of tattooing that has helped it transform. By asserting that there is meaning in a tattoo design, drawn and made permanent on one’s body, we are then assigning some artistic value to the piece. 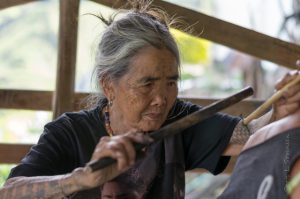 In the Philippines, for example, a “mambabatok” like Whang-Od is highly in demand for the significance of tattooing to the culture and history of her province’s tribe. Getting a tattoo from the legendary Whang-Od has become a novelty-of-sorts, wherein tourists and city kids flock to the mountains of Banaue to have the 98-year-old poke their skins for her signature dots – among many other eclectic designs. The different tattoo designs rendered by Od may have different meanings, but they can all be representative of the journey. Indeed, getting inked by Whang-Od does equate to having a piece of history made permanent on your skin. The value of a tattoo from the OG mambabatok is just priceless.

That being said, people get tattoos for various reasons. Some get them on a whim, like right after a night of hardcore drinking, while others take years to decide. All things considered, given the permanence of a tattoo and the need to showcase it occasionally, people get tattoos in hopes that they are cementing, if not reinforcing,their identity. I guess you can call it “self-branding.”

Given this purpose, and provided that there are a gazillion tattoos in the world, it cannot be avoided that several designs are repeated.Here, we take a look and try to understand the meaning behind these popular tattoo designs. Of course, it is but natural that the youths of today are the driving force behind the rise in tattoos. We can source this in the boom of social media, because a beautifully made tattoo will definitely make for an awesome photo on their Facebook or Instagram feed, except maybe, for a few handful whohave ragrets.

Kidding aside, some of the more prevalent tattoo designs that the kids want include:

Conclusively, tattoos, like any other visual art form, is a constantly changing field. Tattoo artists keep pushing the boundaries of what they can do with the art form. And while the craft may change, tattooing has already broken through into the mainstream, and is now widely accepted, so who are we to say that an explosion of Jaden Smith tattoos will never come to fruition?