Body art could be your way of communicating; an expression of who you are and where you’ve been. But some tattoos could also say what you’re feeling right this very moment. And for many of us in lockdown or isolation because of this really determined disease that wants to wipe out humanity (or at least, create inconvenience on a massive scale), that feeling may be of anxiety.

Can Getting Tattoos Help With Anxiety?

Any type of tattoo, from the photorealistic effect of realism tattoos to the bold, old-school look of traditional tattoos, tells a story about you. So a lot of the ink you’ve got will signify a lot of things, but most will likely convey your ability for survival — your strength.

Although no large-scale study indicates the correlation between mental health and getting a tattoo, it does affect your well-being.

How does getting an anxiety tattoo help you deal with anxiety?

A limited study has found people who got their first tattoo improved their body image. The men and women in the study showed high body appreciation and self-esteem with low appearance anxiety and dissatisfaction.

It makes sense, doesn’t it? Because survivors of any tragedy sometimes get inked to remind them of what they’ve surpassed. For example, those who’ve just been through some life-changing event get an impressive phoenix tattoo to signify their rebirth or growth.

Tattoos are empowering — and carving out a few lines or one compelling message on your arm, chest, back or legs is one way to deal with a debilitating mental health condition. That what you’re struggling with doesn’t define you or control you.

Anxiety tattoos don’t just help you develop a better body image, bolstering self-confidence. It can also allow you to reclaim your body.

Some people who’ve gone through some difficult times have found tattoos can cover scars due to self-harm.

Is There a Symbol for Mental Health?

One symbol has become specific to mental health, and that symbol came about right around 2013 when social media gave way to strangers sharing their struggles. The online conversation led to Project Semicolon.

What does a semicolon tattoo mean? Semicolon tattoos mean an interruption as well as an affirmation of and a solidarity against mental health issues, from depression to suicidal tendencies. The founders of the Semicolon movement equate the grammatical purpose of the sometimes-perplexing punctuation to its symbolic meaning as body art.

People who get tattooed with a semicolon use it as a reminder that they’ve chosen to go on with their lives instead of abandoning it. Although most think a semicolon is used as a way of “abandoning” the first part of a sentence, the punctuation mark isn’t a mark of “giving up” in the world of writing. Its purpose is to combine two related but independent clauses. In that sense, the meaning of a semicolon tattoo as a symbol of overcoming anxiety works because:

Anxiety and depression overlap most times. Both are normal when you experience highly volatile, stressful, dangerous and severely upsetting situations.

But one is not the same as the other. People with anxiety worry about the future and avoid situations that cause their emotions. People with depression feel hopeless and worthless, believing nothing good will ever happen to them. Both will think about death, which is why the grim reaper or the skull is a common symbol for either.

But some unlikely symbols may represent depression in a negative or positive light:

The half is illuminated and the other in darkness, symbolizing a persistent state of struggle.

It represents destruction and punishment; people with depression feel like what they do is of no value and that they deserve whatever form of destruction befalls them.

The insect symbolizes overcoming hardship and reconnecting with nature.

Graceful and beautiful, this fish plays a triumphant role in a legend where it transforms into a dragon after swimming against a formidable waterfall. Done in the style of a Japanese tattoo, the koi fish may well be a powerful ink on depression.

Getting a Semicolon Tattoo for Anxiety 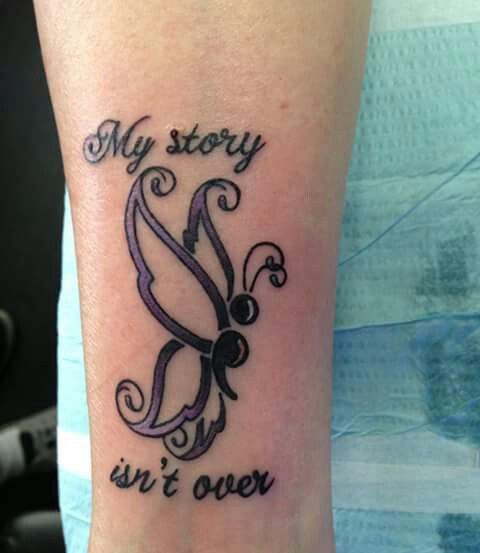 Tattoos for mental health come in several designs. You can even combine one symbolic image with the punctuation mark. For example, the semicolon butterfly tattoo is popular for people who want to convey a kind of resurrection. Yes, that person went through some tough shit. But they’ve come back out of a dark tunnel and managed a transformation.

The inclusion of a semicolon doesn’t alter the butterfly tattoo’s meaning much; a butterfly tattoo symbolizes a metamorphosis, that a person has developed into something they desire and leaving behind their old ways.

If a butterfly isn’t your thing but you want to get more than a graphic semicolon, other images could work with your mental health tattoo.

Some people brighten it up with artistic tattoos.

Yes, anxiety tattoos do have a positive effect on your state of mind. A semicolon tattoo with a butterfly may help you stay on that path to a better life. It may act as your personal coach, reminding you of what you need to live for and to persevere. Your tattoo may symbolize your depression at its peak and your entry into recovery.

No one doubts the power of words and imagery.

But like many tattoo designs, these mental health symbols are just that — symbols. Symbols of inspiration can only take you so far without some serious work on your well-being. A tattoo of a semicolon with the words “Choose to go on” or “Still here” or “Life,” will not magically remove a mood disorder, an addiction, or any mental health disorder.

You still need your community around you. You still need to fight every day. And you should reach out to a professional when what you do still has you thinking those dark thoughts.