Butterfly Tattoo Designs: The Meaning and Symbolisms Behind Different Tattoos

Beautiful, vibrant and dainty, butterflies are a sight to see in any lucky garden. It’s no surprise that many men and women are choosing to have these fascinating creatures tattooed on their arms.

Here’s what you need to know.

Butterflies are insects most popular for its brightly-colored wings and the way it flutters to fly in low altitudes. Butterflies existed as early as 56 million years ago and are under the same order as moths.

Butterflies undergo a four-stage life cycle. First, an adult butterfly lays its eggs on a plant. The eggs hatch and the larvae will then feed on the plant’s leaves. These will then grow into caterpillars that will continue to eat until it is developed enough to pupate inside a chrysalis. It will stay inside the chrysalis to undergo metamorphosis and develop into a butterfly. When it’s ready, it will leave the chrysalis and fly away. 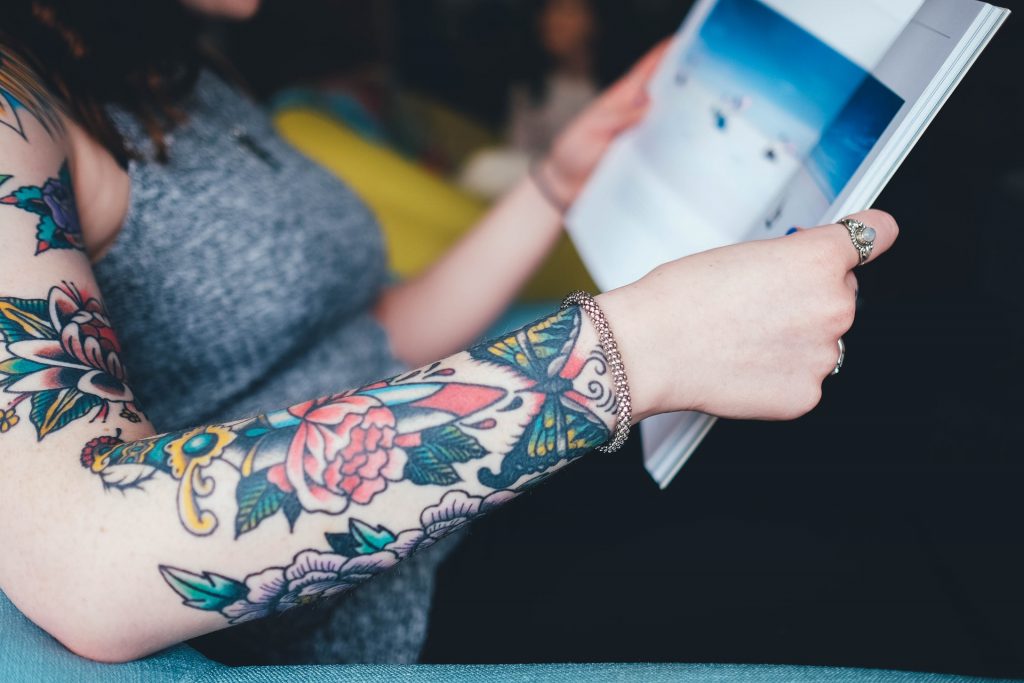 Based on its metamorphosis, a butterfly tattoo can mean you have finished developing yourself and have come into your own self. If you’ve finally achieved the body you want, if you’ve overcome an addiction or bad habit, or you’re deciding to turn over a new leaf and leave behind your old self, a butterfly is a good symbol to commemorate this change in you.

Butterflies have developed a range of wing colors as a natural form of camouflage, mimicry, or aposematism (nature’s way of telling predators to back off) to survive in the wilderness. This is because butterflies are prey to a number of animals like birds, snakes, frogs, rodents, monkeys, bigger carnivorous insects and other animals that feed on smaller insects.

You can consider butterflies as the underdog of the food chain, yet they are enduring and have survived despite its vulnerability to bigger players in the environment.

Butterflies feed mostly on pollen in flowers. But they also eat tree sap, rotting fruit, and decaying flesh and minerals. Although they do not carry as much pollen as bees, interestingly, butterflies have a tendency for flower constancy. This means they visit the same flower for pollen, regardless of the better, more rewarding flowers around it – a good symbol for constancy and loyalty in butterflies.

Because there is evidence that butterflies existed millions of years ago, it’s no surprise that ancient civilizations, like the Chinese and Egyptians, have ancient art pieces depicting butterflies in nature. 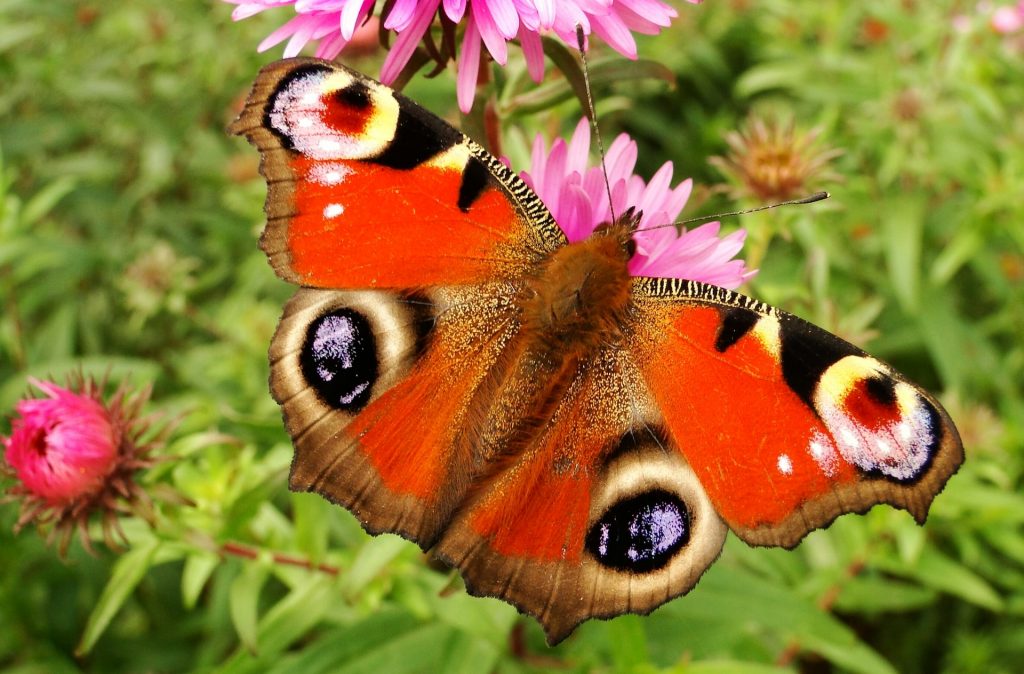 A butterfly could mean a good or bad thing in Japanese folklore, depending on how many you see. It was believed that a butterfly was the personification of one’s soul, whether they were living or dead. One Japanese superstition said that if a butterfly entered your guest room, it means the person you love most will visit. But if you see a large number of butterflies, it’s believed it is a bad omen and serves as a warning that something unfortunate or fatal is coming your way. 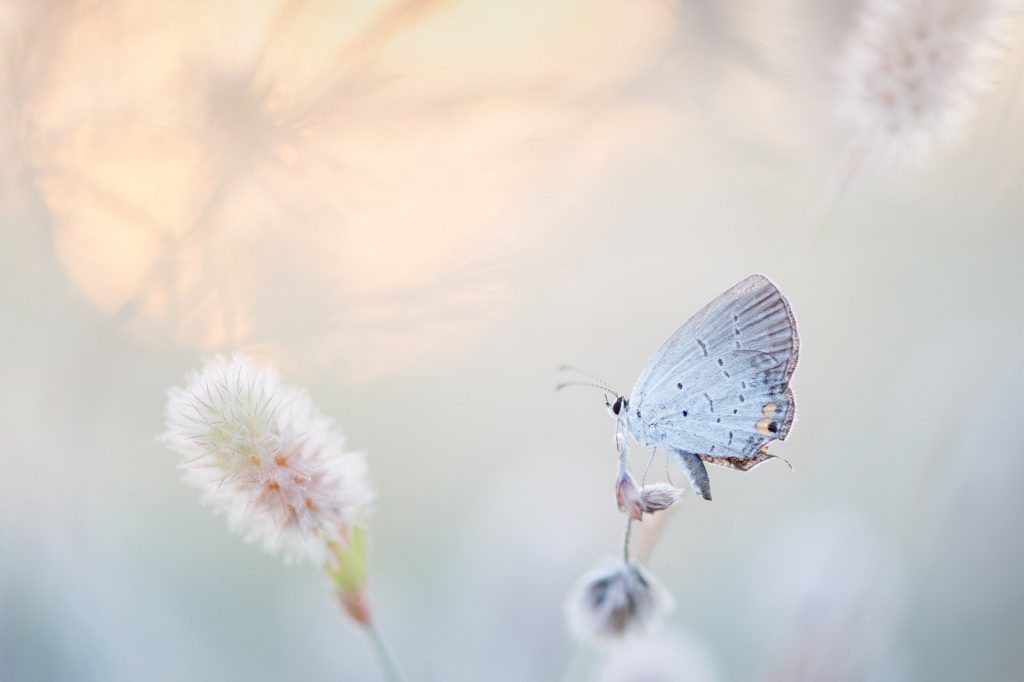 Today, butterflies have a more positive symbolism in Japanese culture. Its metamorphosis carries the meaning of transformation and becoming a new person. A butterfly tattoo design would also mean good luck, health and prosperity.

The Romans also believed that butterflies were associated with the soul. In fact, the ancient Greeks’ word for the insect was psȳchē, which also meant “soul” or “mind.” Sculptures of the dead often depicted a butterfly exiting the mouth of the deceased due to the belief that a person’s soul exits through their mouth.

Other Beliefs About Butterflies

Butterfly tattoo designs can also be a reference to what’s known as the Butterfly Effect. It’s a concept in chaos theory which states that the smallest choices can have big consequences down the road. It uses the example of how a butterfly flapping its wings in the air can later on, if the circumstances are right, turn into a tornado. 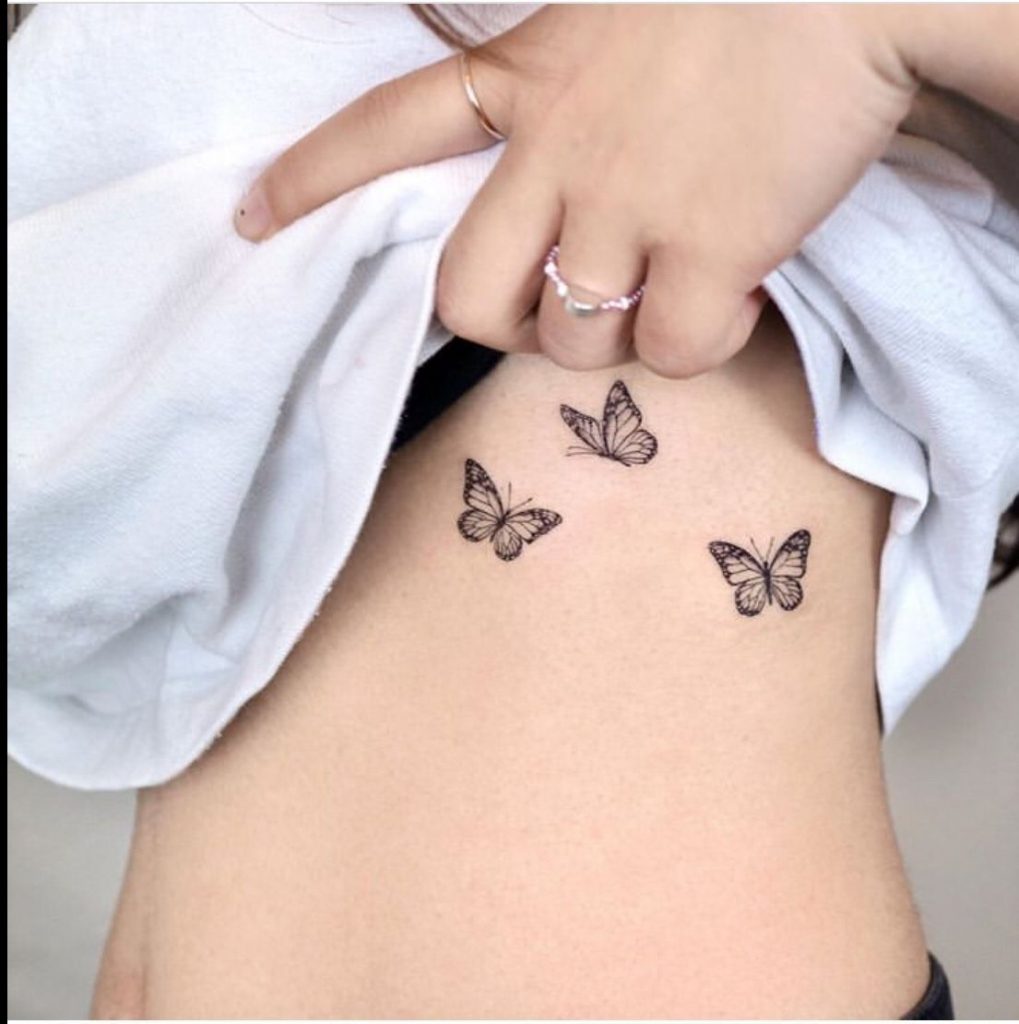 A butterfly tattoo may symbolize the butterfly effect. It can remind you that the smallest actions can have big consequences, so take care of the decisions you make every day. It’s a reminder to exercise caution and to own your decisions because you’ll have to live with the effects of your choices later in life. 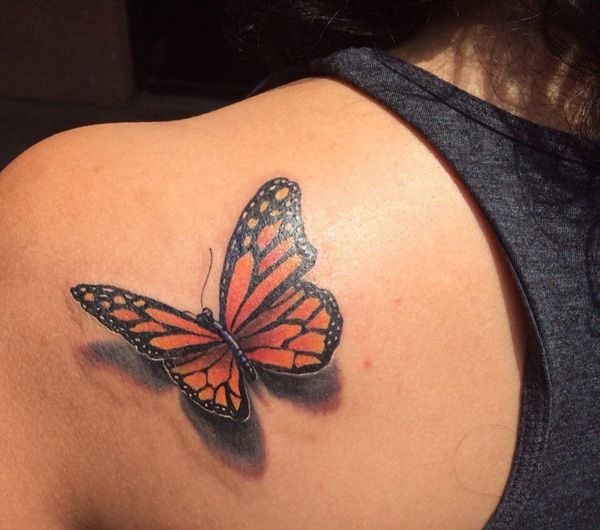 A monarch butterfly is a traveler by nature. They’re known to migrate every year, and they never stick around for too long. It’s the perfect symbol for those who love to travel or never stay in the same place for too long.

True to its name, monarchs are also a symbol of royalty. It’s unlikely anyone in the conservative royal family will show off a tattoo to represent their status, but if you want a tattoo that says subtle sophistication, the monarch butterfly is a good option.

Mexican culture celebrates Dia de los Muertos, a three-day celebration that is the equivalent of Christianity’s three days of All Hallow’s Eve, All Saints Day and All Souls Day (or as most of us like to call it – Halloween). 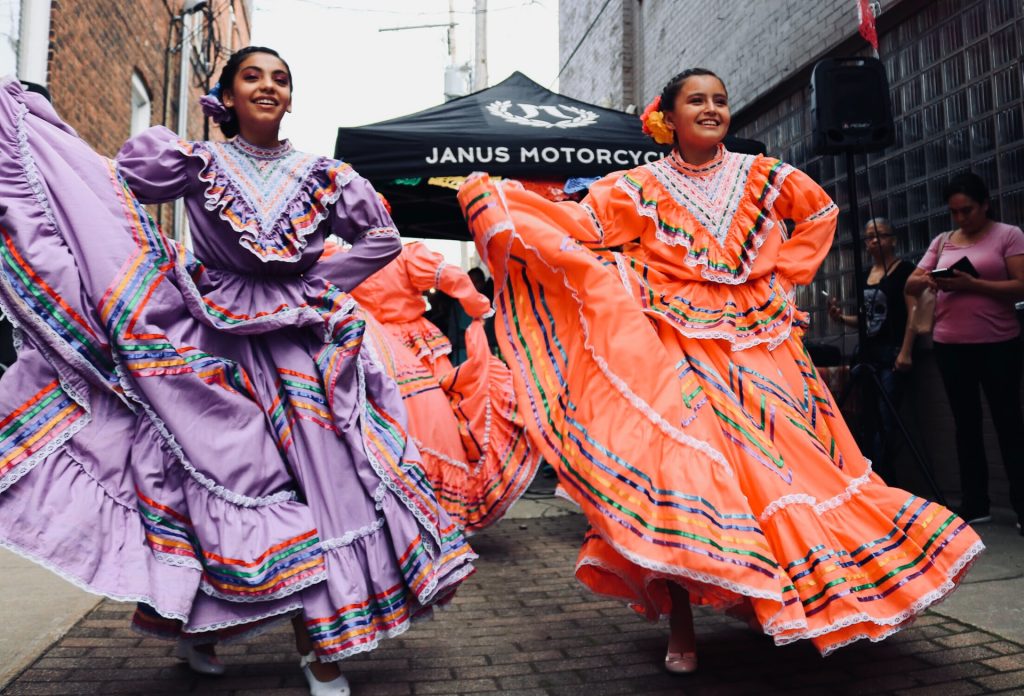 According to ancient Mexican beliefs, the human soul does not die. Instead, the soul lives on in Mictlan until they can return to the land of the living during Dia de los Muertos to visit their surviving loved ones.

Thus, in Mexico, monarch butterflies became the symbol of the departed souls returning to the land of the living in the form of butterflies. They’re believed to be the departed ancestors arriving for their annual visit.

Lately, semicolon butterfly tattoos have become more popular. This is in relation to Project Semicolon, which started in 2013. It is a non-profit movement dedicated to raising awareness of suicide, addiction, mental health and mental illnesses and self-harm. 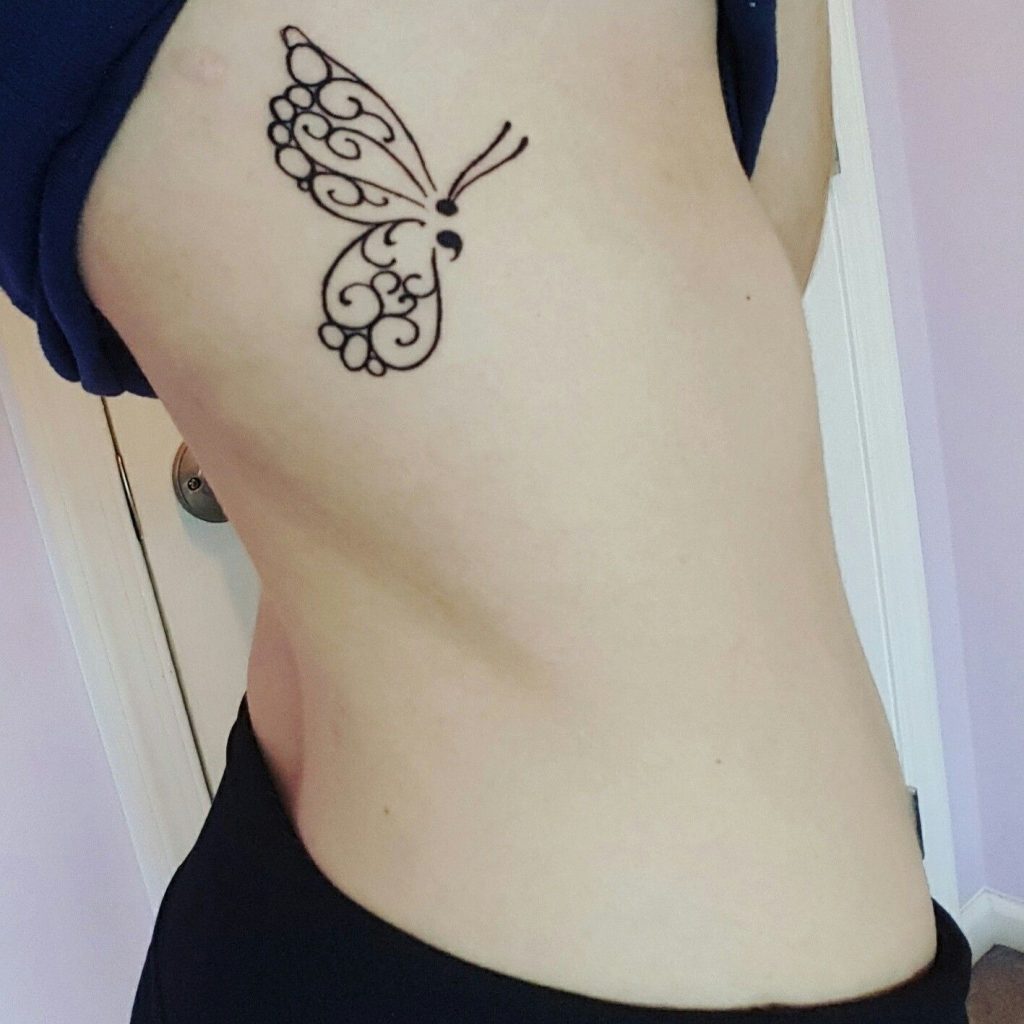 Combining the meaning of butterfly tattoos and the meaning of semicolons, a semicolon butterfly tattoo tells a story of overcoming your grief. With a semicolon, you choose to press forward and see what life has to offer despite the trouble you’ve gone through. And the butterfly symbolizes your transformation after the storm, highlighting how your metamorphosis has turned you into something better, despite the scars and hard times you’ve encountered along the way.

It’s a beautiful message in one tattoo, one that encourages people to move forward. If you’re thinking of getting a semicolon butterfly tattoo, it’s a great way to commemorate the trials you’ve undergone and how far along you’ve come when you look at the tattoo years later and realize how much you’ve endured.