Compass Tattoo: What is the Meaning Behind this Nautical Tattoo?

Is your heart pointed toward a compass tattoo design? It’s a popular choice for travelers, explorers and those who work in tourism, exploration, or nautical professions.

But before you get that compass tattoo, don’t you want to know what it really means? Here’s everything you need to know about compasses and what they symbolize.

What is a Compass?

A compass is a round device used to determine which direction you’re going in. Relative to your geographic location. It can’t tell exactly where you are, but it can tell you whether you’re going north, south, east, or west. 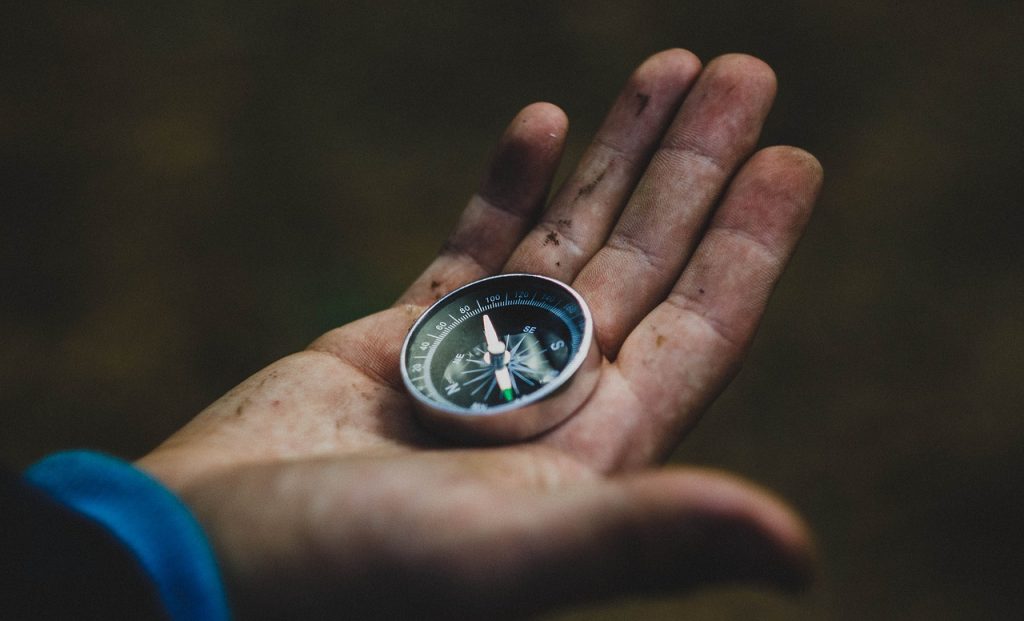 Before GPS, compasses were used by navigators together with a map. Once they track their location on the map and where they want to go, they would use the compass as a guide to where the true north is and then use it as a reference on which direction they should go.

Today, GPS is now a common feature in most smartphones. This means that apps like Google Maps and Waze make it easier to find your location and how to get there. But because GPS requires internet connection and a good phone signal, this is an unavailable or unreliable option. So compasses, maps and other older navigating tools are still necessary in case internet access and signal becomes unaccessible.

Compasses are often used by those who are lostor are looking for direction. This is because compasses are built to detect the magnetic pull of the north pole of the planet, so it can tell which is the objective north even if you don’t know it.

Origins of the Compass

The first compasses came from China back in the Han Dynasty. These were made from naturally magnetized iron ores. However, it wasn’t used for navigation until the Song Dynasty around the 11th century. They were later made with iron needles that were magnetized by striking them with magnetized iron ores. 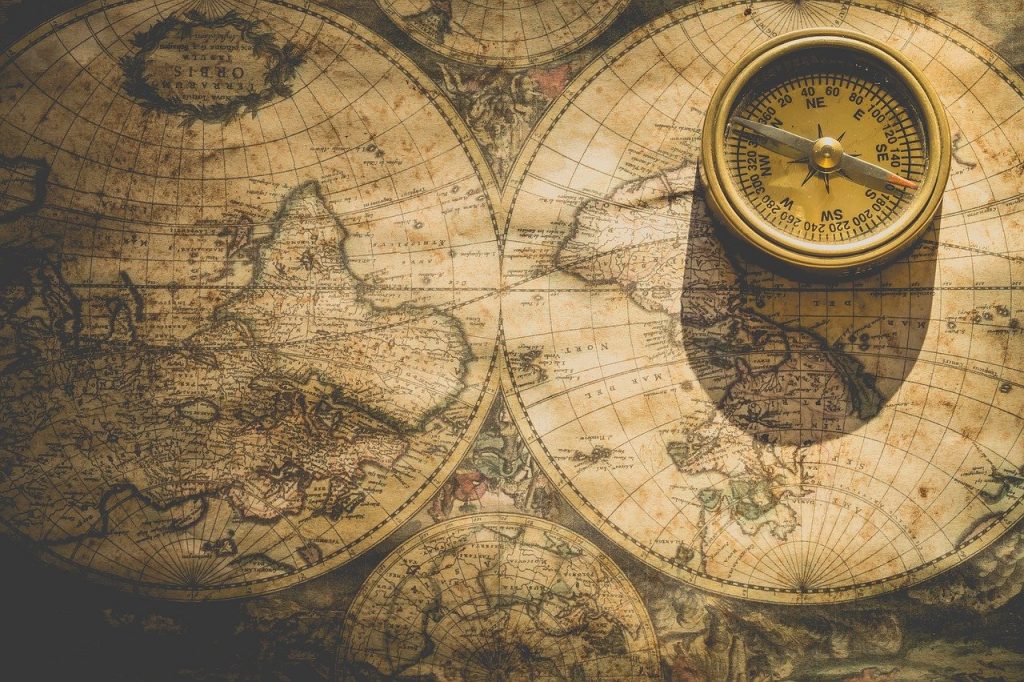 Compasses made their way to Medieval Europe, Africa and West Asia by the 14th century. By the early 20th century, magnets were liquid-filled to help give more accurate readings.

Today, compasses are less popular in urban cities as GPS and smartphone applications are capable of guiding and navigating a person when they’re lost. But for navigators like seamen, forest explorers, mountain climbers and other people who work in remote areas, compasses are one of the essential tools when they’re not within the range of a cellular signal.

What Does a Compass Tattoo Mean?

Compasses always point to the north, so it’s a good symbol to have if you never want to feel lost.I’ve you’ve gone through a bad phase where you felt like you’ve lost your true self, your family and friends, your integrity, or just lost something or someone you’ve always treasured, a compass tattoo can remind you to stay true and remember to find yourself.

A compass can symbolize guidance, whatever this word means to you. If you love to travel, compass tattoos can provide a sense of safety as you enter parts unknown. It’s a reminder that it’s OK to take the road less traveled because as long as you practice caution, you’ll be safe. If you’re entering a new phase or new stage in your life, a compass reminds you to stay true to yourself and help guide you through this new time in your life. 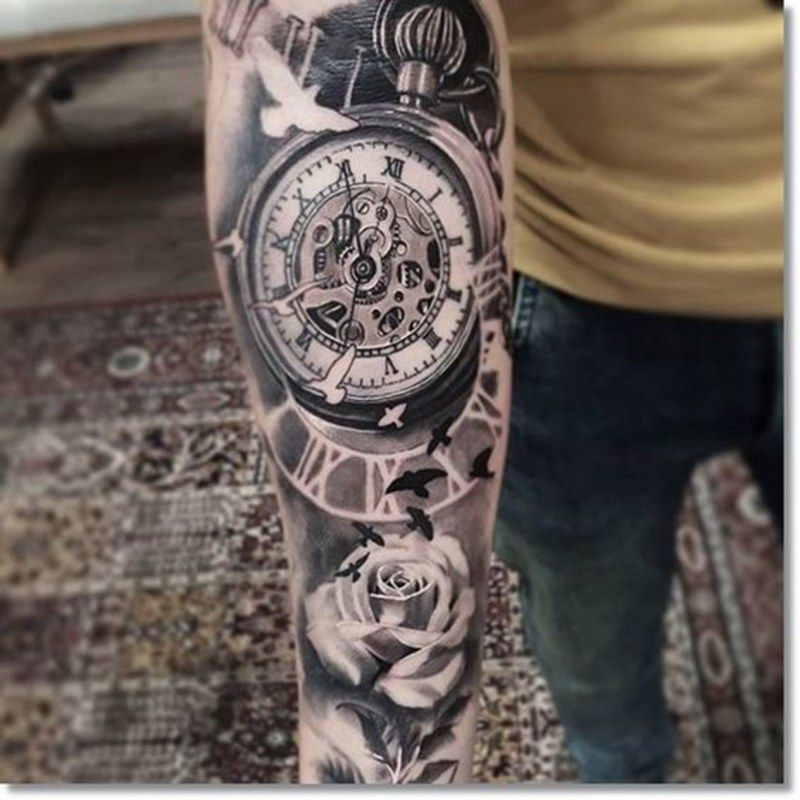 Compasses are the iconic symbol of traveling. You wouldn’t normally use a compass at home or somewhere you’re familiar with that you can navigate from memory alone. Compasses symbolize traveling to new places on your own or with like-minded travelers who make the journey worth it.

Those who use compasses are often independent. You could be out in the sea or lost in the woods, but instead of waiting for help, you turn to a trusty compass and get yourself out of the unknown. A compass tattoo, therefore, can represent your independence. You are no damsel in distress and can always save yourself by finding a way out on your own.

Finally, a compass tattoo can symbolize destiny. Like a compass, you’re always facing north, looking ahead to the future. You don’t dwell on the past or look back on what could have been. You believe in destiny and what it holds for you, and you know that you are exactly where you need to be at the right time.

Compass tattoos are popular for those working nautical or marine-related jobs. These are the seamen, lifeguards, captains, divers, cruise ship employees, marine wildlife conservationists, and more. Those who spend their whole lives building a career in the water may want a tattoo to commemorate their profession. 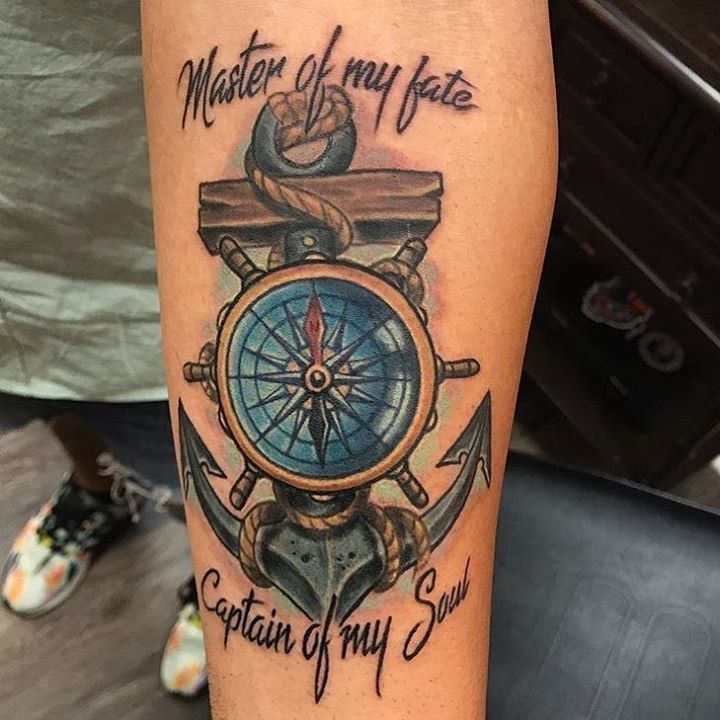 There are plenty of nautical tattoo designs available. Dragon tattoos are an option if you want a more subtle reference to water (despite their fire-breathing features, dragons are serpents and associated with water). Lightning bolt tattoos are great for those who work in ships or lighthouses and have witnessed the fury of the sea during a storm. And, of course, compass tattoos symbolize navigation and how they will eventually find their way through the great seas.

Or, you could choose to do a combination. A compass tattoo may be open to interpretation for different non-nautical meanings, but combining two nautical-themed tattoos can drive the point of your profession.

For example, the meaning of an anchor and compass tattoo is the combination of the unshakeable anchor and the north-facing compass. An anchor, despite its size compared to a ship, can do a great deal when it’s released. It’s unmovable, enduring and carries a huge responsibility to prevent letting the ship be moved by the waves. And a compass looks forward and is independent, never letting the things around it affect what it does.

A person with an anchor and compass tattoo is usually someone in a maritime-related job who sees themselves in these two symbols. They aren’t moving, not letting petty things destroy them or change their resolve. These are the people who stand their ground, especially when they know what they’re doing is right.

But at the same time, this person is not stagnant. Like a compass and its user, it will continue to keep moving forward. They will press on and better themselves, looking ahead to the possibilities of the future rather than staying stuck in the past.

So whether you put your compass tattoo on your forearm, back, or somewhere hidden in your uniform or everyday clothes, a compass tattoo says a lot more than just directions. It has a deeper meaning – a promise, a wish for yourself – and can make you feel safe or remind you of who you once were in your own life’s journey.