Feathers are not just for the birds (or, if some archaeologists believe, most two-legged dinosaurs 160 million years ago). A feather tattoo can also have plenty of meaning for a person who chooses to get inked with one.

But aside from references to birds, what else can a simple feather tattoo mean? You’d be surprised how much meaning it can have.

Where Feathers Come From

Feathers most obviously come from birds. All birds have feathers, and they’re the only type of animal existing to grow natural feathers. However, one theory suggests that birds evolved from dinosaurs; if this is true, then it means that dinosaurs like the t-rex were originally covered in feathers and resembled chickens rather than the giant lizards they are popularly depicted in the media.

Because feathers only naturally come from birds, the only way to get natural feathers is to get it from a bird. Some birds naturally molt and shed their old feathers every year to get rid of old feathers and make way for new ones, and collecting these feathers is the more humane method. But more inhumane methods include plucking a feather directly from a bird (imagine someone yanking a bunch of your hair strands and see if you like it).

Feathers come in different colors, sizes and features, depending on the bird it comes from. For example, birds like penguins and ducks have feathers that have waterproofing features, whereas birds like owls are built from thermal insulation for colder climates.

When a bird flies away, it can sometimes leave a feather behind. That feather can represent something left behind, which can have a lot of different meanings depending on those who choose to get inked.

A feather tattoo can symbolize something you left behind.

Maybe it’s a bad relationship, your youth and childhood innocence, a close loved one, or something you’ve spent a huge chunk of your life chasing after. If it’s a good thing you’ve lost, a feather can symbolize that although you have left it behind, it will always be in your thoughts and a part of you. But if it’s a bad thing, it’s a reminder that some birds have to leave behind the feathers that won’t help them soar.

It can also represent your loss and how it’s you that got left behind. Maybe it can represent a deceased loved one who you like to think flew into heaven while you stayed behind on Earth. Or, it can represent how a loved one went far away for better opportunities: maybe it represents how your parents left you behind to give you a better life, or if you’re the spouse of a military person it can remind you of your partner whenever they go overseas.

As the saying goes, “Feathers appear when angels are near.” When you see a feather in an unexpected place, some say that it’s a sign that an angel or a departed loved one is watching you. 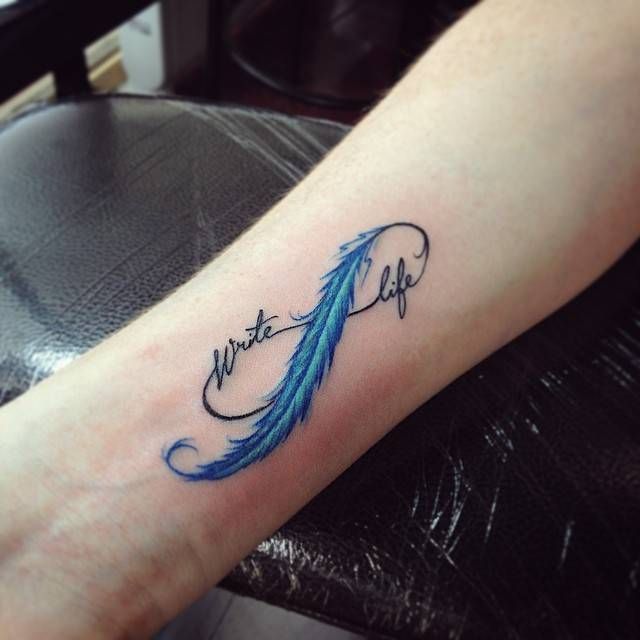 A feather tattoo can serve as a reminder that your loved ones have truly never left you. When you’re down in the dumps and you feel like nothing in life is going your way, seeing a feather tattoo can help remind you that you’re not alone and someone up there is looking out for you.

A reminder of your guardian angel can help you find comfort and support. You don’t have to wait to find a feather on the ground when you’ve got one up your sleeve (or back, or wrist, or — well, you get the idea).

The sight of birds flying away often represents the departed and those we have lost in life. If birds aren’t really your thing, a feather tattoo is a good way to honor those who have passed. It represents how a bird has flown away to a better place. But they aren’t totally forgotten in the place they were because they left something for you to remember them by: photos, memories and the influence they’ve had on your life.

Saying goodbye doesn’t necessarily have to be a sad or bitter moment in your life. Maybe you grew up in a small town where rarely anyone ever leaves, but you flew the coop because you knew there were better opportunities in the big city. Or you’ve chosen to study and work abroad in the hopes of becoming an expert in your field. 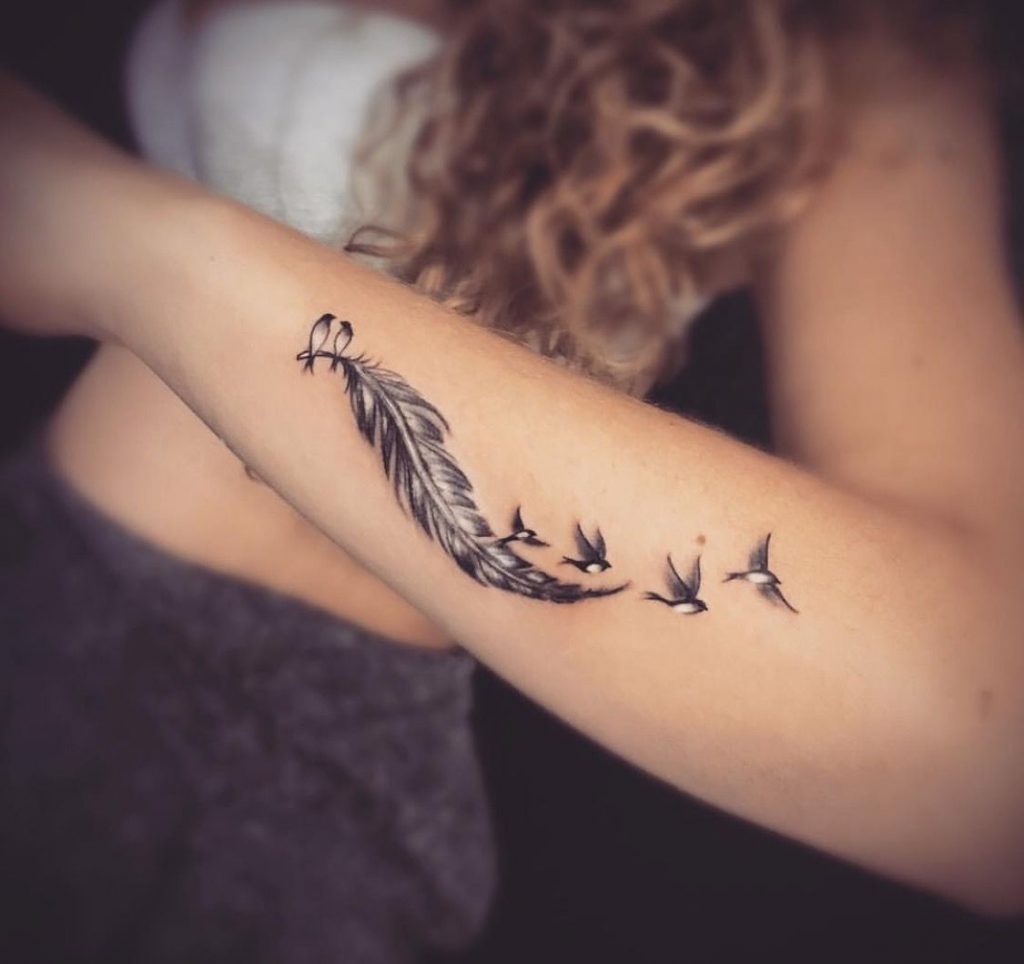 When a bird takes flight, they fly unapologetically. Although I don’t speak bird, I read that although it hurts birds when humans pluck their feathers, birds will naturally shed damaged and old feathers to make room for new feathers that can help it fly and adapt to its environment.

The old feathers in your life may be difficult to forget, but a feather tattoo reminds you that it was necessary to “molt off” the old to make way for the new as you soar to greater heights.

Birds come in a variety of feather colors and textures. You don’t have to be an ornithologist to tell the difference between most feathers, but having a colored feather tattoo can add additional meaning on top of the general meanings of feather tattoos.

Why Do People Get Feather Tattoos?

Everyone has their own reason for getting a tattoo. 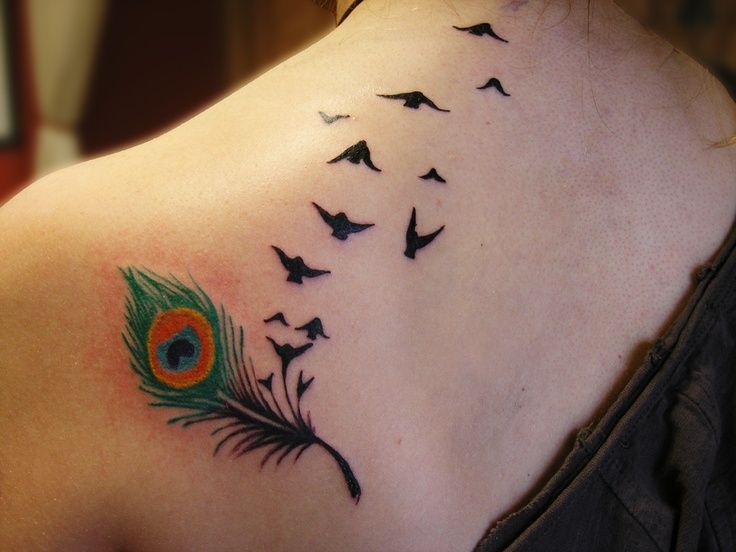 A feather often symbolizes flight or loss, and nearly everyone has experienced loss at least once in their life. Of course, there will be those who get a feather tattoo simply because it looks pretty, so let’s not spoil their fun and try to gate-keep those who can or can’t get a feather tattoo.

Some other tattoos may also have similar meanings.

A butterfly tattoo or a dragon tattoo can have the same meaning as a feather tattoo in some cases, or you can choose a combination of designs to further drive the meaning you want. But just remember that more complex designs are more expensive and may take more than one session to complete.