Five thousand years ago, henna tattoos (or mehndi, as it’s known in several cultures around the world), had already existed as a form of body adornment. While the practice of wearing henna tattoos on one’s hands on their wedding is still a staple in Hindu cultures, many people use henna dyes to sport temporary tattoos on their bodies. Today, you might find stalls along the beach offering henna tattoo art or tattoo parlors offering temporary tattoos using the dye. However, the meaning of henna tattoos in Hindu cultures still provides a deep insight into the meaningful purpose of mehndi and why women in their civilizations continue to wear henna tattoos during their wedding.

Henna has been used to tattoo bodies at least 5,000 years ago. These are made from dyes created by trees under the Lawsonia genus. The henna tree, also known as the Lawsonia inermis, is the most common and most popular name for it, but it may also be called the hina, the mignonette tree, and the Egyptian privet.

This is popularly used for temporary tattoos, but it can also be used for dyeing your hair, nails, or even fabrics and other objects. When it comes to hair dyes, henna dye makes a great plant-based dye that also stimulates hair growth and strengthens your scalp. The color will eventually fade after four to six weeks, but the effect looks more natural than the copper-orange hair color you might experience from low-quality dyes. 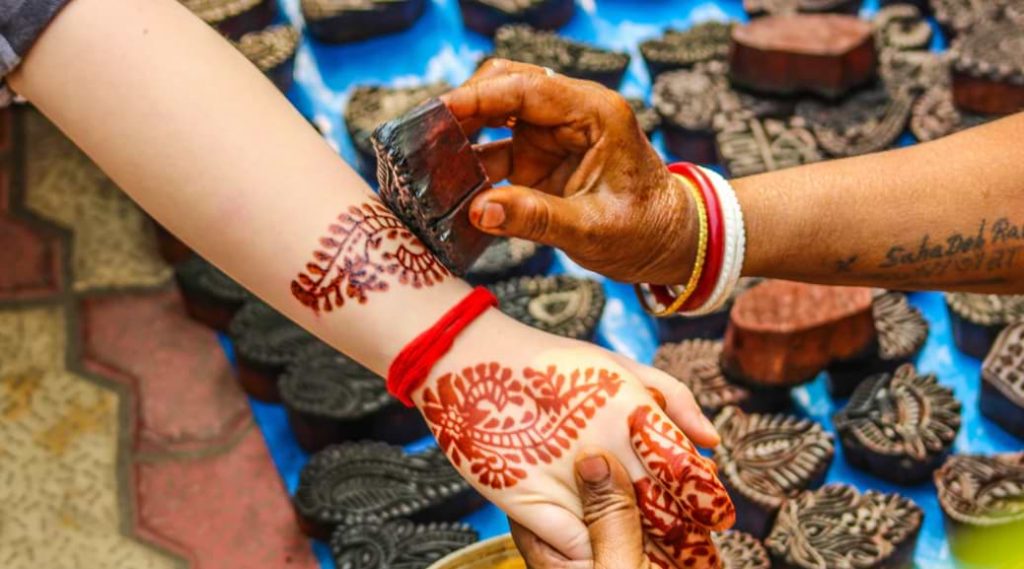 To make henna dye, henna leaves are harvested, dried, and ground into a powder. The leaves won’t stain you until you mash it into a paste because the staining is due to the lawsone molecules found inside the leaf. Henna artists who make their own organic paste use organic materials such as water, lemon juice, and tea to mix the powder to a liquid paste, while some add sugar to thicken the consistency so that it attaches to the skin better. Using essential oils can improve the staining and how long henna lasts on your skin before fading, but not all oils may be safe on your skin. Because you have to bring out the lawsone molecules, artists must make their henna at least two days before usage to get as much lawsone out.

To create a tattoo, early henna artists usually use sticks, but today, there are cleaner methods of doing so. In Morocco, for example, artists would use syringes, while in India, the artists use piping tips similar to what you’d see in a baker’s shop used to pipe icing. Modern tattoo artists, especially those who practice permanent tattoo art, may use Jacquard bottles, which are small bottles and a fine nozzle tip.

After the tattoo artist draws the design on your body, staining will only take a few minutes. However, the longer you leave the paste on your skin darker and longer it lasts. Stains may first appear orange, but then eventually darken. Once it reaches its darkest possible color, it lasts roughly up to three weeks.

Henna dyes are a historical part of India, Middle Eastern Asia, and Africa. The earliest record of henna use may be from 1574 BCE, where the Ancient Egyptian queen Ahmose-Henuttamehu was said to have red hair at the sides, which was most likely stained with henna.

In its purest form, henna is generally safe. Plenty of henna tattoo artists make their own henna paste to ensure it has nothing but organic ingredients, as some commercial henna makers may add artificial dyes and preservatives that some people don’t want on their skin or their children’s skin.

Contrary to what many people believe, henna isn’t illegal in the United States. However, the Food and Drug Administration only recommend getting henna used for hair color. While they aren’t recommending it for your skin, they only prevent commercial usage for coloring your eyebrow or eyelash hair or any skin near your eyes. This won’t stop people from making their own henna tattoos at home or buying a box of henna dye and doing exactly what the FDA told them not to do, but it does prevent manufacturers and sellers from creating henna products for, say, dyeing your eyebrows. If you’re looking for a tattoo artist to do your henna, these regulations don’t apply to them.

However, in terms of safety, not all henna is good. In the past, some manufacturers used harmful dyes mixed in with the henna powder to create colored dyes. A product known as “black henna” has a substance called “p-phenylenediamine” or PPD. This is OK for henna hair dyes, but when used as a tattoo dye, it could cause skin irritation, discoloration, and scarring. In worse cases, the carcinogens in PPD can be cancerous.

Apart from black henna, henna is a safe dye for your skin, especially when your tattoo artist uses organic substances that can fade with the henna after a few washes.

Mehndi is another name used to describe henna body tattoos performed in India, Africa, and the Middle East. It stems from the Sanskrit word “mendhika,” which was the ancient term used to describe the plant “henna.” To achieve henna’s popular dark brown color, henna is mixed with turmeric powder as described by the Vedas, the Indian Hindi culture’s religious texts.

It was originally meant for women, and for men on some occasions, but eventually, both men and women in Hindi practices began wearing it. These are usually applied to one’s hands and feet and come in many traditional designs with their own significant meanings. While these are most common in wedding traditions, mehndi tattoos are also significant in traditional performances, such as when dancing to the classical Bharatnatyam.

Mehndi follows the same application as henna, but there may be different rituals when it comes to traditional practices such as weddings. The henna can be left overnight and removed.

The Meaning of Henna Tattoos in Weddings

If you’ve ever seen a traditional Indian wedding (take, for example, one of the many wedding parties between Nick Jonas and Priyanka Chopra in 2018), you can see how different it is from a typical western wedding. The colors are more vibrant, the guest list is much longer, and a typical Hindu wedding can last a week compared to a one-day wedding celebration. It’s a long wedding celebration because there are various events and traditions that take place, one of which is the henna party.

In some countries in South Asia, Middle East, and North Africa, prior to the wedding (the night before the wedding or a few days before the wedding), all female guests from both families gather in the home the bride and groom will live in. Everyone wears dresses called binalli, while the bride puts on a red veil. Either a hired mehndi artist or a relative applies an intricate mehndi design on the bride’s hands and feet. The name or initials of the groom are hidden somewhere in the mehndi.

This is the main practice, but different cultures may have some variations. In India, women wear bright colors, while the groom, if present, may be forced to wear yellow. In Pakistan, the henna party is called Rasm-e-Heena and is one of the most important traditions before the wedding, though it is only celebrated by the bride’s family. In Bangladesh, there are two separate mehndi ceremonies for either side of the family.

Henna must be applied by someone who is happily married so that the wedding couple may also have a happy marriage. It is also believed that, during the henna party, unmarried people who also have henna drawn on their hands may soon be married.

Today, both brides and grooms put on mehndi designs to bring happiness and success into their marriage. Instead of doing it the night before, the mehndi is added days before as, according to superstition, the darker the color of the henna, the more love will develop between the two. As such, families prioritize the henna party over the other smaller customs, creating grand festival-like parties just to host the mehndi ceremony.

The designs used in mehndi are intricate and significant. Drawing a certain design means the couple are hoping for certain aspects they wish to receive during their marriage. Here are some examples:

While it may just be a means to a safe temporary tattoo, the practice of henna tattoos date back thousands of years and entails a long-standing tradition in marriages in parts of Asia and Africa. And while tattoos can also have their own significance, it is interesting to see how much ceremony is placed into an old wedding custom that has evolved and survived to this day.