The Meaning Behind: Lightning Bolt Tattoos

We have always been fascinated with lightning, and why shouldn’t we: it turns night into day and it’s always succeeded by either fire or thunder. And for as long as mankind started inking their bodies, the lightning bolt has almost-always found a place on our skin.

Getting a tattoo is a commitment you make for life, literally. Although there are ways to remove a tattoo, it’s not always successful and, frankly, can look ugly if not done properly. So when it comes to choosing your tattoo design, you need to be careful by considering:

One of the most popular, albeit a little problematic if done a certain way, designs for tattoos are lightning bolts.

Tattoos with this design are often chosen because of their symbolic meaning: lightning bolts, after all, are heralds of a storm, and were the symbol of the Gods of old.

Done correctly, a lightning bolt can mean power, swiftness and decisiveness. Similar to a thunderbolt (but not the same), lightning represents a split-second moment. And exactly like other tattoos on an artist’s flash sheet, this imagery doesn’t stand for one thing.

Not all lightning bolt tattoos are created equal, and they may even symbolize inequality, racism and fascism. The “SS,” for instance, has been associated with lightning bolts because its flat body and pointy ends resemble the natural electric discharge. The “SS” represents the Schutzstaffel of Nazi Germany, and has become a distinct symbol of white supremacists and neo Nazis.

Lightning Across History and Cultures

Perhaps the most famous association with lightning bolts is the Greek Gods. Zeus, King of the Gods, has always been associated with lightning, portrayed in countless stories, murals, and paintings wielding powerful bolts of lightning and hurling them toward the enemies of the Titans. Not only were lightning bolts Zeus’ weapon of choice, it was also a symbol of his power over both Man and Gods.

As the harbinger of rain, -and thus, the harbinger of life itself -the lightning bolt is an important and positive symbol for renewal, hope, and the power of creation itself. As mankind shifted from a hunter-gatherer society into an agrarian one, the importance of a land’s fertility became a question of life and death itself. 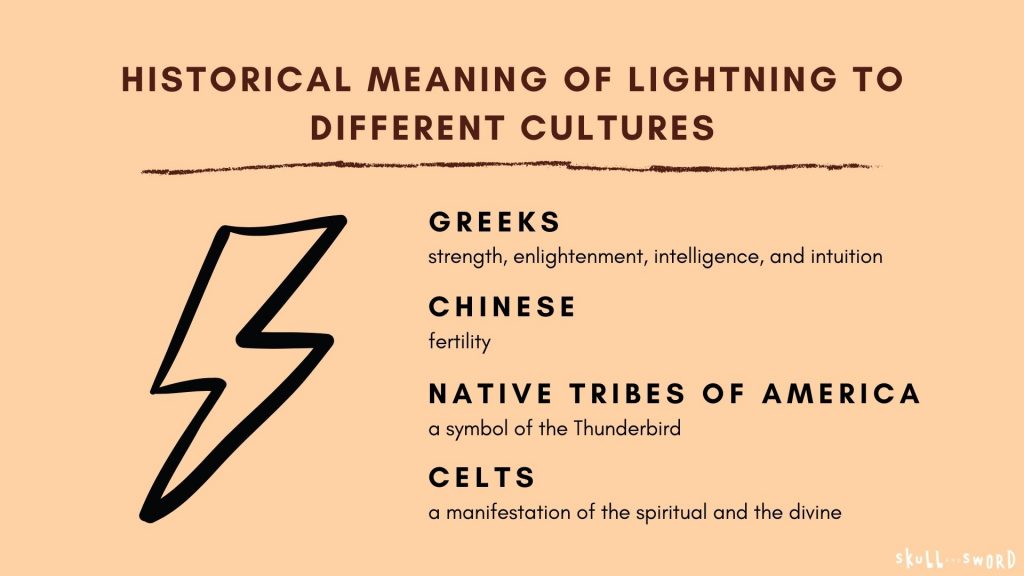 This idea of lightning representing fertility is shared by the Chinese, while the Native tribes of America saw it as a symbol of the Thunderbird, a mythical creature that embodied truth, honesty, and morality. According to the Ancient Hopi tribe, the holy Thunderbird shoots out lightning from its eyes, striking down the cruel, the untruthful, and the immoral.

For the Celts, lightning was the manifestation of the spiritual and the divine. Places where lightning has struck were considered by the Celts as a sacred place. As such, these places became centers of worship, ritual, and ceremony. Any Celtic tribesman or woman that was struck by lightning was considered to be literally “touched by the Gods”, whether they survived.

All of these cultures gave birth to lightning’s positive attributes. However, its association with power, control, and domination also made susceptible to corruption.

As mentioned earlier, lightning bolts have a wide variety of positive concepts attached to it, from strength and power to intelligence and truth. The thunderbird, whom the Native tribes of America believed to be the progenitor of lightning, was the paragon of virtue. Having its symbol on your body meant that the person embodied the best aspects of the Thunderbird, and as such, can be trusted to be righteous and morally upright.

But with light comes darkness, and lightning bolt tattoos that are paired with a rain cloud tattoo can symbolize bad luck, misfortune, even despair. However, this can also represent the triumph of your will, breaking through the storm and emerging victorious.

The infamous Schutzstaffel, the Nazi party’s very own secret police, used the double lightning rune of the old Germanic tribes as their insignia. Many white supremacists have a double lightning bolt tattoo somewhere on their body to show their allegiance to racist ideology and should be avoided.

Certain lightning bolt tattoos, if done in questionable shops, can lead to serious trouble: law enforcement officers are well-versed in the racist meaning of certain tattoos, and getting the wrong lightning tattoo can definitely lead to you being questioned.

Some creative fans also pair the lightning bolt insignia with either the symbol of the Deathly Hallows, or with one of Hogwart’s Wizarding houses. Even Ariana Grande’s tiny lightning bolt tattoo behind the ear reportedly echoes her love for the monstrously popular fantasy series.

Some other notable appearance of the lightning bolt are:

Whatever your reason, however, it’s always best to know what kind of meaning your particular tattoo holds, both for you and the people who may see it. Although it’s always admirable to get inked for something that holds special meaning, it’s also best to be culturally sensitive to certain designs.