What Does Your Medusa Tattoo Represent?

Depending on which stage of Medusa’s life you want to focus on, the Gorgon mortal can represent either. What most people know about the unfortunate Medusa is usually connected with her being a villain. Anyone who can stare you into a literal stone tends to have that rep.

But Medusa wasn’t always the bitch with the bitchin’ hair and stare.

And so it makes sense for any Medusa tattoo, as with any tattoo design, to represent a slew of ideas — from the downright wicked to the paradoxical and cryptic.

What does your tattoo of the Greek goddess mean?

The Meaning of a Medusa Tattoo

The snake hair, the scary-looking tongue and the menacing stare — if your literal interpretation of Medusa falls to the dark side, then your ink could mean:

Easy enough to use Medusa as intimidating fantasy body art.

You can place the design of this Greek mythology tattoo somewhere visible, like the length of your arm or leg, the shaved back of your head; even a Medusa hand tattoo could come off threatening enough — with the right elements and style.

If you’re a loner or don’t take too well to people, the tattoo could also be meant as a warning. Consider what happens to anyone who makes eye contact with Medusa. People who know her story may interpret your ink for them to “stay away.”

As a kind of metaphor tattooing Medusa could symbolize your demons and how you haven’t conquered them yet. Maybe you’re trying to tell people, the pain from your past still haunts you and you’re liable to “hurt” people.

Another meaning to your tattoo may be similar with how the evil eye is used by some people: evil to ward off evil.

What else could strike terror into another beast but a haunting killer gaze with terrifying snakes for hair. So if you’re looking to keep the negative energy away, the bad stuff in your life, a tattoo of Medusa works.

It’ll work especially if the design of your tattoo is Medusa’s head.

Medusa’s Head: What It Symbolizes

What is the big deal with Medusa’s head? It stands for power.

Even when Perseus cut off her head, Medusa’s killer gaze still had an effect.  She may have lost her body, but the tragic Gorgon mortal never lost that one thing that made her an iconic character in every story, modern or classical: the ability to petrify — literally.

Medusa’s slayer, Perseus, managed to destroy the sea monster terrorizing Ethiopia. After seeing the beautiful Andromeda, Perseus took out Medusa’s head and turned the sea monster into stone. The decapitated head of Medusa was so potent that Perseus had to keep her in a special sack during his journey back home.

When Perseus reaches home, he hands Medusa’s head over to Athena, who puts it on her shield. How? The goddess of war also happens to be the goddess of handicraft, so she’s likely found a “crafty” way to place a decapitated head on a metal shield. If your Medusa tattoo design includes a shield, it could signify you’re “battle-ready”; that you have the might to destroy your enemy.

A non-contentious meaning to the Medusa and shield design could be protection.

Your tattoo of Medusa’s head doesn’t have to symbolize “combat skills” or physical prowess. It could also symbolize feminine power. Something to be said for a woman whose beauty was so devastating, it swayed Poseidon to seduce her, right in Athena’s domain. The seduction ticked off the goddess enough to punish the mortal Gorgon for it, turning her into a beast replacing her hair with crazy snakes.  That level of reaction, which goes beyond the mortal realm, is power beyond one’s control.

It makes sense for your Medusa tattoo to mean feminine power, especially if she’s drawn with a particular sensuality.

In late architecture design as well as pottery, Medusa’s image became a typical component. But instead of being depicted as a beast with a beard, gnashing tongue and frightening mouth during the Archaic period. No, artists illustrated her as she may have been before Athena’s jealousy victimized her: human and beautiful.

Other than Medusa’s head, what other tattoo design ideas could work for this mythical subject?

Design Ideas for a Medusa Tattoo

Many variations will work for your Medusa tattoo. First, think about what style you want to go with because it’ll narrow down options.

You could go with a Japanese style tattoo, depicting Medusa as a geisha. The combination of Greek and Japanese culture could create one striking ink, especially if you’re willing to get a massive one on your back.

If you prefer the classical, a realism tattoo style would be perfect for illustrating Medusa as a goddess. Although she’s not technically one since she didn’t have dominion over anything, the way other goddesses were, like Artemis (hunting and natural environment) and Hera (marriage and birth) and Leto (motherhood). Medusa was one of the three monsters known as the Gorgons, the only mortal, and whose parents were sea gods.

Your photorealistic tattoo of Medusa could be as creative as including pop culture in the design. If you’re into fashion, you could get a tattoo of Versace’s Medusa; the illustration of her head symbolized beauty and art.

Medusa has appeared in multiple variations on movies (“Percy Jackson & The Olympians”), videogames (“God of War”) and TV (“Legends of the Hidden Temple”).

Another design idea could be to use fine art. From geometric to watercolor, tattoo art provides an enormous canvas for your Medusa ink.

If surrealism is your bag, Salvador Dali created Medusa in her human form but with wings and snakes that appear more like an octopus rather than as her hair.

For further inspiration, give these artworks a once-over: 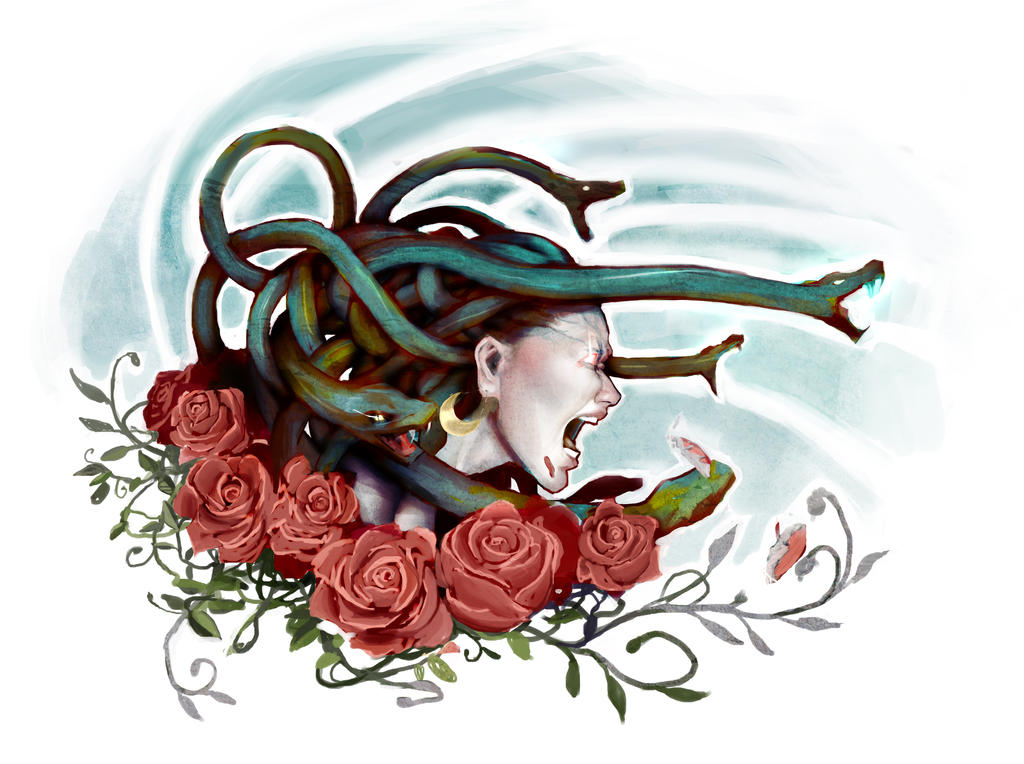 If you’re crazy about mythology tattoos, plenty of other options exist besides Medusa. Take your pick from the lineup of gods and goddesses: from Apollo to Zeus, from Aphrodite to Nike (yes, she’s the goddess of victory).

But if you’d rather not do the gods and goddesses, the mythological creatures of Greek tales would do just fine as a striking body art. Each one could symbolize a different idea, represent a goal or honor a memory or experience that has changed your life. The phoenix tattoo, for example, is perfect for symbolizing how you’ve turned adversity into a triumph.

Other graceful, winged creatures to tattoo include:

Whichever mythological creature you go with, never lose sight of what you want to say with your ink. Do the same for when you come into a shop and ask for Medusa tattoo on your hand, back or leg.