Pushing the Boundaries of Graffiti

We’ve come a long way in the world of graffiti and street art. Particularly, a lot of graffiti artists have developed their styles to surpass the usual types of pieces we identify as a work of graffiti or street art. From wildstyle letters to iconic characters and mural-like rendering, we’ve been seeing more and more pieces that echo the difficulty of the craft, especially in an attempt to create great works of art. Various painting effects, such as intricate designs that evoke hyper-realness, are pushing the boundaries of graffiti. And while we still acknowledge and recognize what “real” and “legitimate” graffiti is, we are also witnessing artists utilize the different elements involved in the art form. This experimentation of sorts is what we all need to see and appreciate.

Take, for example, how Odeith makes use of perspective in his pieces. The Portuguese artist creates hyper-realist paintings, with subjects such as insects, to showcase the power of perspective. Viewed from a calculated vantage point, these pieces can then come to life. Similar to how optical illusions work, these pieces make sense to the audience when seen from a pre-determined angle. This type of three-dimensional work is also referred to as anamorphic art.And for this style to be executed effectively, the artist often has to utilize the corners of a wall, ashe creates the piece through the careful manipulation of the subject’s shape and size. This involves the artist’s rendition of light and shadows, which ultimately gives an embossed or 3-D effect, as if the subject of the piece is an actual, giant insect.

In this feature article via Boredpanda.com, Odeith’s pieces are shown in before and after photographs. One can only surmise the number of hours spent to capture the 3-D effect that brings these works of art to life.

Another 3-D graffiti writer noteworthy to highlight is Daim, a German artist whose pieces are so clean they appear as if they were digital prints.

His lettering is quite complex, and for those who aren’t that familiar with graffiti and hand-styles, it can be a bit of a stretch to read his pieces. Given their blown up sizes and abstractive themes, his pieces are mural-like, which can only further the three-dimensional visualization. Again, the use of perspective plays an important role in constructing his pieces. Similar to Odeith’s works, Daim’s pieces feature the careful and deliberate control of light and darkness in creating perspective on a flat wall.

All things considered, the main distinction between the two artists is their usual choice of subjects: Odeith prefers his letters with animals and insects, while Daim focuses more on his letters as abstractions, shapes and objects, often surreal and infrastructural in expression. That beings said, one thing is for certain: both Odeith and Daim are masters of hyperrealism.The way they render their works are so clean, we can barely make out how they’re paintings on a wall. Hard to imagine how clean these are, especially when you consider that these were painted with spray-cans, right?

Not For Putting Out Fires

The use of different caps pretty much changed the entire game. Fat-caps helped bombers get their thick, angry letters out there real quick, while the technical writers used calligraphy caps to effectively get those sharp lines. Check out this video by ArtPrimo.com, as hereviews the Female Fatcap and showcases the beautiful flares coming out of the cap. Quality caps like these have been instrumental for many a graffiti writer whose goal was to bomb a city with their signature one-liner tags.

But apart from the graffiti cap, one of the ground-breaking innovations specific for graffiti use is the KRINK Fire Extinguisher. For comparison’s sake, if a spray-can is a gun, then the extinguisher can be very much considered a rocket-launcher. Try to visualize the amount of paint blasting out of an extinguisher, and you’ll realize how powerful of a tool this is in owning a wall. Many graffiti artists in the past have repurposed fire extinguishers for large-scale tagging, but it was only in 2008 that a brand, such as KRINK, actually devised the fire extinguisher as a product for painting. It is such an awesome sight to see this level of tagging – the huge letters spattered on a wall.

With the development of products like these, soon enough, graffiti artists will come up with a way to make even larger tags and gargantuan pieces in their bid to outdo each other and rule the streets.

Drones are the Future

Again, we cannot discount the fact that technology will always play a part in the evolution of art. Drones, one of this era’s multi-use innovations, are being used in a variety of industries and businesses. For example: at a certain price range, there are packages from weddings and events organizers that include a team of photographers and videographers who use drones to capture your special moments. There are also government and transportation agencies that either have plans (or are already in the process) of implementing drones to monitor traffic. And finally, apart from these two, we also now have… *drumroll* the drone graffiti.

“Paint by Drone” is a project by Carloratti.com that aims to use technology in painting hard-to-reach surfaces, such as those found in construction sites. This kind of tech can easily equip taggers with the ability to hit the spots that they would otherwise encounter as life-threatening.

KATSU, a graffiti artist from NYC, is among the more famous taggers known for using drones. In 2015, KATSU used a custom drone that had a spray can attached to it, as he defaced a billboard of Kendal Jenner in the Big Apple. The drone is controlled with a remote that has specific functions, like spraying short or long dots as it hovers across the surface of Jenner’s face.

This is yet another manifestation of an art form, such as graffiti, employing new technology towards the development of the craft. As many graffiti artists take pride in hitting the most illegal and high-securityof spots, like a billboard in a busy city, the drone is definitely a useful tool that can help artists boost their rep.

In the graffiti and street art scene, massive works have always been revered as nothing short of mad props to the artist. Take, for example, how we’ve recognized the Fire Extinguisher as a heavy-duty weapon for the graffiti artist to wield. So, with that in mind, how big can one really go?

Well, there is INSA, a street artist from the UK, who combined technology with a concept – to create “the largest animated painting” – sohe went and created the world’s largest GIF. 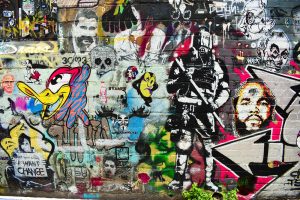 It took INSA, known to specialize in “gif-iti,” and his team a total of 576 man-hours to paint on a vast space of concrete land in Brazil. Along with the documentation of the entire process, the use of satellite technology, and the idea of creating a GIF, the collective effort gave birth to a colossal piece that is accessible to the entire world. This is how an artist can use all avenues available to him, like technology, in showcasing his work to an audience.

And if this doesn’t speak volumes about how today’s artists are keen on pushing the boundaries of what can and can’t be done in graffiti and street art, then there isn’t anything else left to be said. The execution of such a grandiose work is nothing but admirable.