A Rose By Any Other Name: A Rose Tattoo’s Meaning

“A rose by any other name would smell as sweet” – or whatever it was that Shakespeare said. Roses are a popular symbol of love, whether you’re trying to fit in with a Valentine’s Day trend or just showing a lover that you’re thinking of them.

But are you thinking of getting a rose tattoo? It’s a popular tattoo design for both men and women, and it’s not just about love.

Here’s what you need to know before getting inked: the many rose tattoo meanings that can apply to your next tattoo design.

Roses are mostly found in Asia, Europe, North America and northwestern Africa. You can naturally find red, white, yellow and pink roses, but many florists offer roses in unnatural colors like blue by letting roses absorb dyes to get its intended color. 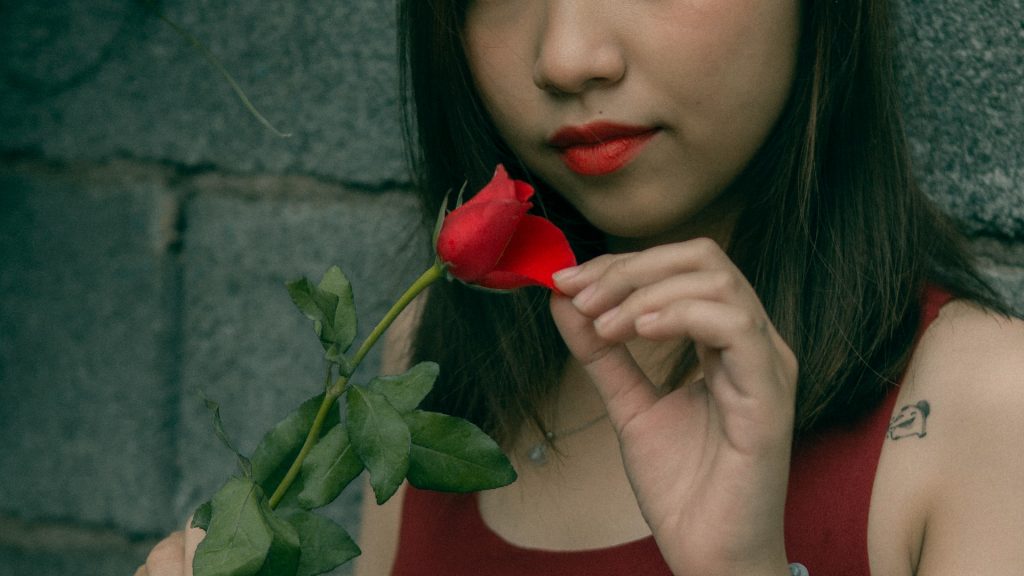 Roses are known for their beauty and fragrant scent. Although it’s generally associated with themes like love and Valentines’ Day, many cultures represent different meanings and symbols for roses.

But don’t let the beauty of a rose fool you: every rose has its thorns — literally. In their natural form, roses have spiky thorns along its stem. Anyone trying to pluck a rose from the ground may be unprepared for a sharp prick. It’s not poisonous, but it is painful. So unless you’re getting your roses from a florist, it’s best to keep your hands off rose bushes.

Roses’ association with love dates back to the Ancient Greek mythology, where the goddess of love, Aphrodite, was said to prefer roses over any other flower. She was often depicted with roses on her head, feet, and neck.

In Greek mythology, roses have pretty bloody origin stories. According to one myth, roses were originally white until Aphrodite wounded herself on a rose’s thorns and stained roses red with her blood. Another myth claimed that Aphrodite’s lover, Adonis, was killed and a rose bush grew from his pool of blood.

Either way, roses are meant to symbolize love that’s more than just a one night stand. It’s an eternal love that surpasses time and death. This means you wouldn’t give roses to someone unless you really cared about them. Or at least, that’s what it’s supposed to mean.

Yin and Yang, But Make It a Flower

Yin and yang are a popular choice for the concept of duality. But did you know that a rose is just as good of a symbol? A rose is known for its beauty, and this flower is known to signify, aside from love, concepts like hope, new beginnings and promises. But the thorns contrast the beauty of the rose and represent the negative sides of life: disappointment, loss and thoughtlessness. 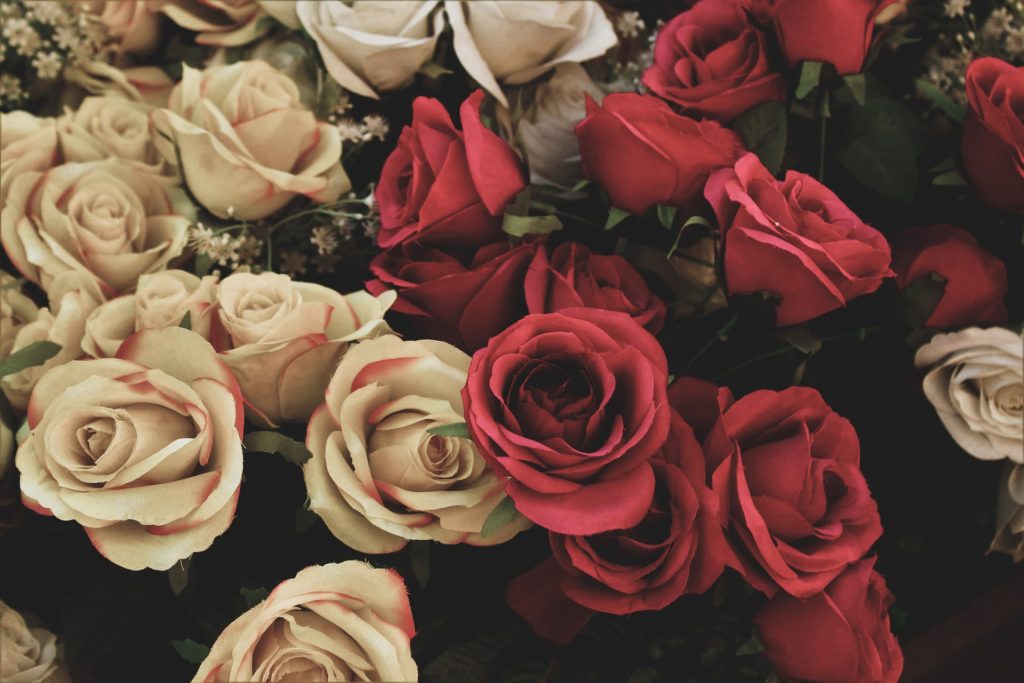 You may think life is a bed of roses — until you remember that roses have thorns.

For the average Joe or Jill, life is not smooth sailing and instead of a life filled with rose-scented candles and rose oil, you’re bound to get scratched by the thorns life has for you. There is a balance in life, and you’re bound to experience both good and bad. But if you only focus on the thorns, you’ll never get to appreciate the beautiful flower on its own.

In the Ancient Roman Civilization, roses were a symbol of wealth as they required a lot of cultivation and attention to grow roses year-round. If you could light rose incense, shower yourself with rose petals, or even eat a dish garnished with rose petals, you were obviously a high-roller in Rome and entitled to a lot of respect. After Roman turned to Christianity, roses became a symbol of the Virgin Mary.

Wars of the Roses

English History associates roses with the civil wars in 15th century England for the control of the throne of England. Prior to the war, England was ruled by the royal House of Plantagenet. But after King Henry VI died with no child to inherit the throne, two cadet houses (the House of Lancaster and the House of York) fought for decades on which House was the rightful heir to the throne.

It was known as the War of the Roses because of the two houses’ badges: the Yorks had a white rose, whereas the Lancasters had a red rose.

After Henry Tudor of the Lancastrian side won the war in 1487, he decided to strengthen his claim by marrying Elizabeth of York, the eldest daughter and heir of Edward IV, thereby uniting two strong claims to the throne and establishing the House of Tudor, symbolized by the united red and white roses.

Red roses are popular for symbolizing romantic love, passion and desire. They can also symbolize one’s sacrifice or to honor the memory of a dead loved one. Other colors (both natural and artificial) have their own specific meaning. 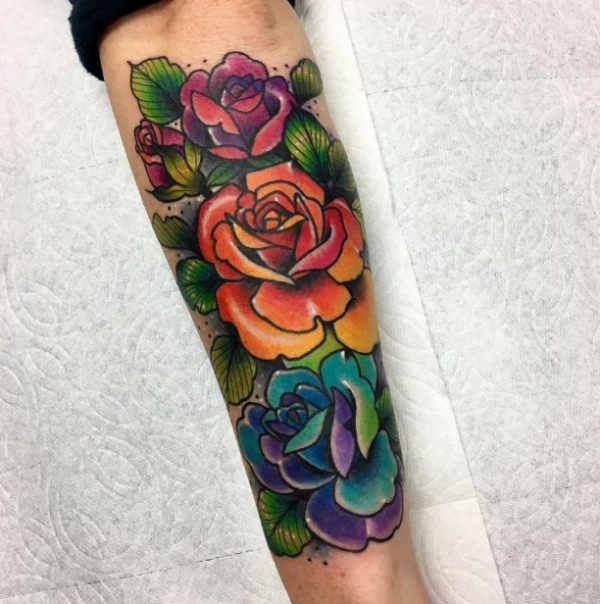 If you want a colored rose tattoo, here are your options other than red.

A dagger tattoo doesn’t necessarily mean criminal affiliations, but has multiple ideas represented by it. It can represent a sharp pain you may have experienced in the past: the death of a loved one, the betrayal of a partner, or even the sacrifice you’ve gone through in the hopes of a better life. 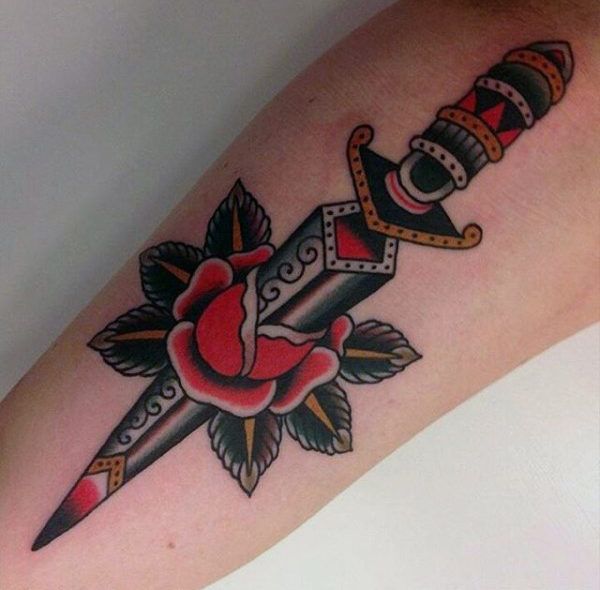 Just like the pain of getting inked, the pain of that negative moment in your life will eventually get duller. And although you won’t feel the gutting pain in your heart as you originally did, you won’t forget the pain of surviving.

A dagger reminds you that you’ve survived the pain, but you don’t forget it. Let that dagger be a reminder, a promise, or a warning of the pain.

So what is the meaning behind a dagger through a rose? A dagger is cold and sharp steel whereas a rose represents life with both beauty and pain. It’s a good symbol to represent the beauty in pain and how life continued for the better after the worst (I mean, you could do a rainbow or a lightning bolt tattoo to symbolize that, but a dagger-rose combo is just edgier).

A dagger through a rose represents your life growing up through hardship but are now living comfortably. It represents how you were at the lowest point in your life in the past but, looking back, you’re not perfect but you’re doing way better. As long as you believe there is light at the end of every tunnel, a dagger will always complement a rose’s beauty and pain.

Whether you get a rose tattoo inked on your hand (to symbolize how you love through action or simply because tiny tattoos on your hands are in fashion) or a complex tattoo across your back, roses say more than just “I love you.”

Rose tattoos aren’t limited to just men or women, and are the perfect tattoo design for those who cherish the deeper meaning of a rose. Roses are beautiful, but they can be painful.

And hey, if you’re a tattoo fan, you probably already know a thing or two about pain.