A History of Violence? The Ancient Link Between Tattoos and Criminality

Far from being a modern fad, tattoos have been around since at least the Neolithic era, with the oldest example, the preserved mummy called Ötzi, dating back to at least 3250 BCE.

The mummy, known as Iceman, was found in a glacier in the Ötztal Alps between Austria and Italy and has around 61 tattoos.

Tattooing also has a long history with the Austronesian peoples, with many of them using a small mallet and a sharp tool to drive ink, made from a mixture of ash and other natural dyes, into a person’s skin. The tools can range from citrus thorns, oyster shells, fish bones, or obsidian.

But while many of these tattoos were decorative, many ancient civilizations saw tattoos in a negative light.

For example, the ancient Chinese saw tattoos as barbaric and would often tattoo the Chinese character for ‘prisoner’ (囚) on the faces of criminals.

In Europe, the Picts and other Gallic tribes would often cover their bodies in elaborate tattoos using woad (a type of plant) or copper. These tattoos were described in detail by Julius Caesar himself in his book Gallic Wars. Today’s historians, however, are still in disagreement as to whether these tattoos were painted early in life or done when the tribes would sacrifice their warriors in religious rituals.

Ancient Greeks and Romans, deriving the idea that tattoos were barbaric, would often tattoo slaves, prisoners-of-war, and criminals either as punishment or to ‘brand’ a person. Although decorative tattoos existed in Ancient Greece and Rome via Egypt, it was not widely practiced and was, like today, viewed with scrutiny.

A Change in Mindset

Not all tattoos were viewed with suspicion in Europe. Christian pilgrims would often tattoo the Jerusalem Cross on their bodies to commemorate their successful pilgrimage (a practice that is still alive and well today). Meanwhile, in Great Britain, an interest in tattoos began when explorers would bring back Austronesian peoples to England, many of them tattooed in accordance with their culture.

A prime example of this would be the Filipino slave Jeoly (or Giolo), who was captured by European slave traders off the coast of the Philippines and sold to noted British explorer, William Dampier (who would later inspire the Daniel Defoe novel Robinson Crusoe). Jeoly was renamed “Prince Giolo” and “the Painted Prince” and was displayed to aristocrats and circuses.

Despite the dark origins of Great Britain’s fascination with tattoos, Jeoly paved the way for tattoos to become fashionable in Europe. By the late 18th to early 19th century, tattoos became popular both with the upper-class nobility and lower-class working folk.

Sailors would tattoo their bodies as both decoration and superstition (many of these sailor tattoos are still popular today), while royals like King George V, Edward VII, Frederick IX, and Kaiser Wilhelm II (among others) also sported tattoos, usually ornate renderings of their family coat of arms.

Although many cultures practiced tattooing either for aesthetic or religious purposes, it was also used as a way to punish criminals with a permanent reminder of their crimes. Thus, jailhouse tattoos, as they are known now, actually have a history that stretches back to ancient times.

Each country’s prison systems will often have tattoo cultures that provide different meanings for different designs, with some being more elaborate than others.

Despite acceptance from both the upper and lower class in the late 19th century, the middle class still viewed tattoos as a sign of criminality. And in the gulags of Russia in the early 20th century, the practice of tattoos took on a sinister and elaborate system of meaning.

As the Soviet revolution swept across Russia in 1917, the Soviet Secret Police, or NKVD, rounded up the country’s roving gang of criminals and bandits. Those who did not die in bloody executions were sent off to different gulags or labor camps where the dregs of society, from criminals and bandits to political prisoners and dissidents, were kept far and away from the rest of ‘civilized’ society.

It was here that the Russian criminal underworld began to take shape. As more and more criminals and violent gangsters started populating the gulags, the top, most respected of them created a system of order to ensure the survival of their criminal organization.

These people quickly became known as the vory v zakone, or thieves-in-law. These early mobsters established a series of rules, laws, and practices in the Vorovskoy Mir, or the Criminal World, to govern the different vor, or thieves, in the gulags.

Tattoos became an essential part of the Vorovskoy Mir, with tattoos used to identify different vor and their crimes (i.e., their usefulness to an organization), or as a warning to other gulags about the criminal’s behavior (i.e. pedophiles and police informants).

Although various scholars and anthropologists have tried to decode the meaning of Russian criminal tattoos, many of these studies barely scratch the surface of the deep symbolism behind every design. After all, part of the vor code is secrecy.

In Japan, the practice of Irezumi, literally translating to ‘inserting ink’, is often thought to date back to the Paleolithic period of the Japanese islands. Although the indigenous Ainu people were known to sport decorative and social tattoos, their exact purpose (and origin) is still up for debate, with the Ainu tattoo culture being significantly different from Irezumi.

By the Edo period (1600-1848 AD), tattoos crossed over from being prison markings into fashionable trends that both the wealthy and the lower class would take part in. Again, exactly who wore Irezumi designs is up for debate: some historians claim that it was only the lower class who would get these tattoos, which often depicted scenes from traditional folklore. While some say that it was the wealthy merchant class, barred by the nobility from flaunting their wealth openly, who would get expensive and elaborate Irezumi as a way to flout the law.

By the time of the Meiji government, tattoos were outlawed and quickly became synonymous with criminality and gangsters. The Yakuza, Japan’s version of organized criminals, adopted tattoos as a way to identify themselves as being a part of the gangster life and as a form of superstitious protection (i.e. lucky charms).

While the meaning of Yakuza tattoos aren’t as complex as the Russian vor, the designs were much more elaborate and sophisticated, with their Irezumi often depicting traditional Japanese motifs like mythical creatures or Buddhist imagery.

Sadly, Japan still views tattoos in this negative light, with many workplaces and public baths banning people with tattoos from either working or entering the premises. In fact, the Japanese government is still actively discouraging people from getting tattoos, with the Mayor of Osaka back in 2012 launching a campaign to rid companies of employees with tattoos.

Much like their Russian counterparts, jailhouse tattoos in the American prison system also carried a wide range of meanings and were received either as punishment for flouting one of the unspoken inmate rules or as confirmation/affirmation of a convict’s membership in a gang. Often, jailhouse tattoos in America are also used to signify the crime that the person committed or serves as a warning for other inmates about that person’s behavior.

Unlike their Russian and Japanese counterparts, the organization of American prison gangs is a lot less complex and sophisticated, with gang and jailhouse tattoos often being used as an identifier of that person’s allegiance.

Tattoos: A History of Violence?

In the age of digital technology, where robot drones make commercial deliveries and quantum computing is a thing, our society still has ancient hang-ups and connecting tattoos with criminality.

It’s not just in America that tattoos are still looked down upon: as we mentioned above, Japan has a pretty serious no-tattoo policy across their country, with many establishments even going so far as to ban people with tattoos from stepping foot in their store. While there are no laws that ban tattoos in Japan, it’s common practice to shun inked folk away.

Of course, in the modern world, these discriminatory practices have been softened, especially to foreigners, but the stigma remains.

The ironic thing? Because of the connection between tattoos and the yakuza, many yakuza members are actually foregoing tattoos to blend in with the crowd. Raging against the machine, they are not. 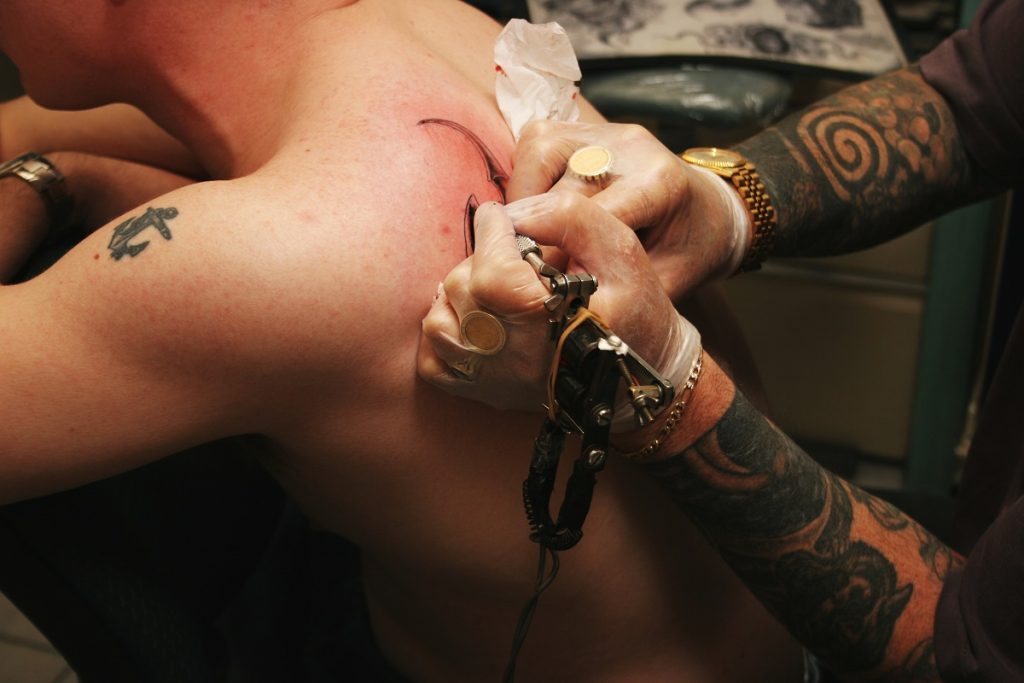 Taking it a step further, Turkey’s highest religious body, the Diyanet, issued a fatwah in 2015 urging all Muslims with tattoos to either have their ink surgically removed or, if the tattoo can’t be removed, repent for even getting it. The Turkish Diyanet is firm in its stance that the Prophet Muhammad banned tattoos in the Koran.

Some countries, while not exactly against tattoos in general, can be sensitive about certain designs: for example, Thailand and Sri Lanka, countries with significant Buddhist populations, are very sensitive to foreigners and non-Buddhists (and even some Buddhists) who might be sporting a Buddha tattoo, or a tattoo of a Buddhist chant or verse, as they see it as disrespectful. While it might not land you in jail, it will get you dirty glances.

While the American public is still on the fence about tattoos, one thing is for sure: it’s going to take a lot to completely sever the connection between crime and tattoos. Our only advice? Maybe don’t get a tattoo with a history of criminality behind it.