Triangle Tattoo Meaning: What Does a Triangle Symbolize?

For those looking to get a simple tattoo, iconic designs like dragon tattoos may be a bit too complex for their minimalist tastes. Simple tattoos are a growing trend in tattoo parlors, with many people preferring simpler, subtle designs that reflect their ease and personality.

Out of the various minimalist tattoos, the triangle tattoo is becoming a popular choice for men and women. Those who have their hearts set on getting a triangle tattoo may already have a reason and meaning behind it, so if you’re also encouraged to get one, you should know a triangle tattoo’s meaning can encompass a lot of concepts.

Still interested in a triangle tattoo? Well, here’s what you ought to know. 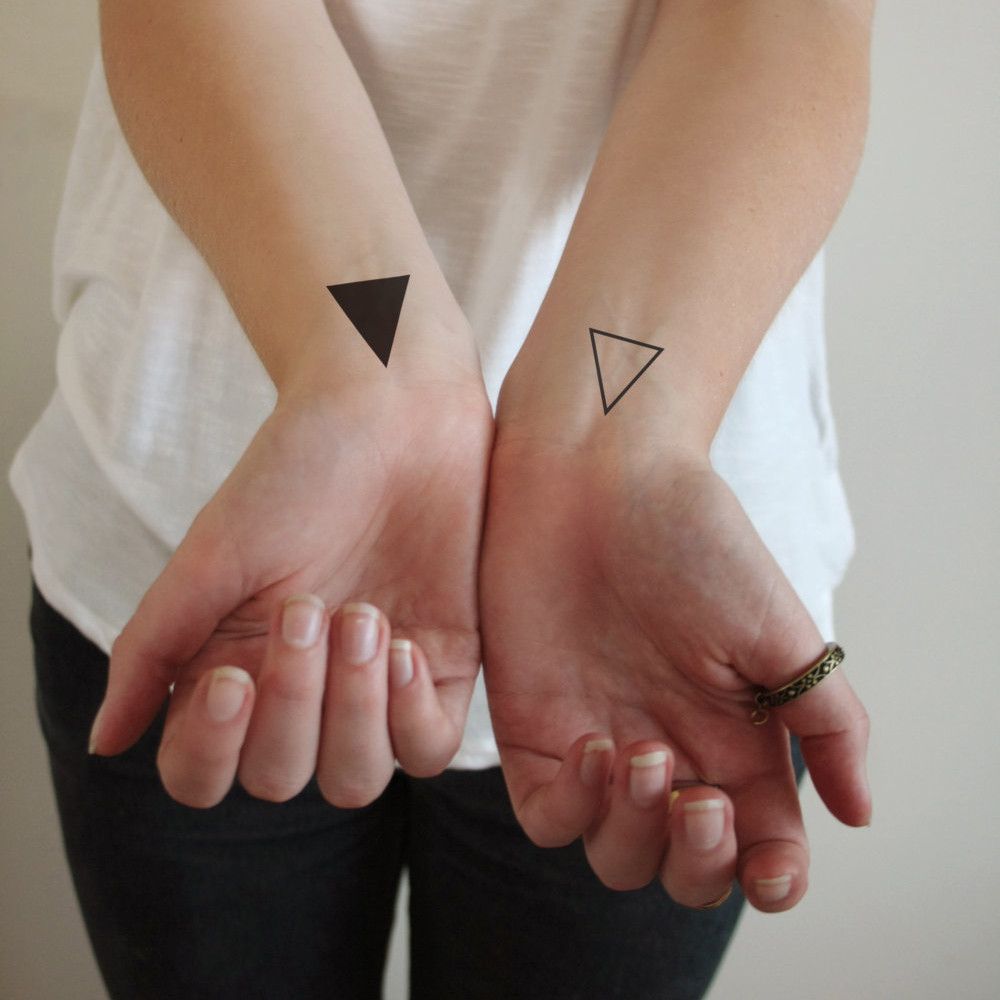 A triangle is a basic geometrical shape with three sides. It doesn’t matter if all, two, or no sides have equal length, as in mathematics there are multiple types of triangles:

Triangles are always associated with the number three due to its shape. This can have multiple meanings for everyone, which we will list down later. For one thing, the number 3 can mean different things to different people. 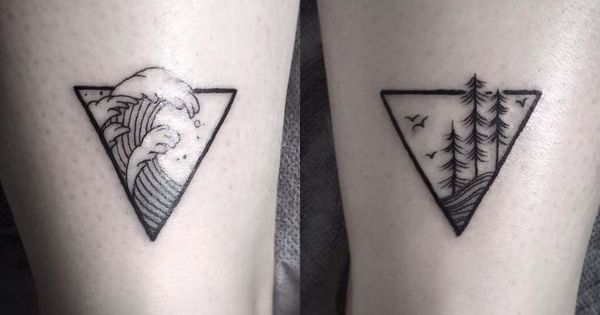 For religious Christians devoted to their faith, a simple triangle tattoo is enough to reference the Holy Trinity. The Father, the Son, and the Holy Spirit make up the three lines of a triangle. When you look at the bigger picture, the entire triangle is a reference to their God.

Spiritual triangles also extend beyond Christian religions, as other religions and beliefs have their own trinities. Triangle tattoos can also be a reference to phases of the moon (waxing, waning and full), the trinity of a human body (mind, body and spirit – the parts of a human one must take care of), the phases of time (past, present, future), and the creation, preservation and destruction.

The Triangle as Eye of Providence

In other religious contexts, a triangle with an eye inside of it refers to the Eye of Providence. In a Christian sense, the all-seeing eye represents divine providence and how God watches over everyone. 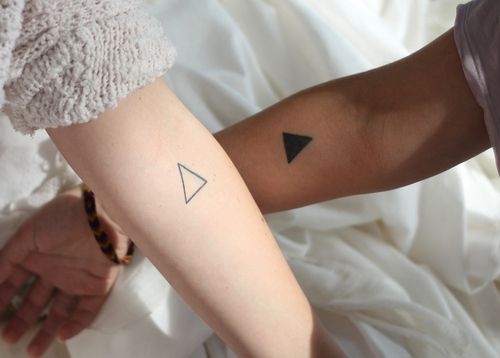 Having this tattoo is a good way to show your faith and belief that God is watching you, so there is no need to be afraid. However, the eye has also been used as a tattoo for fraternities, other religions, and even those who believe the eye to be a symbol of the Illuminati.

Triangle symbol tattoos are popular in Europe. A few of these examples include the triquetra and the triskelion.

The Triquetra – also known as the “trinity ring” or the “trinity knot,” it is three interlaced arcs shaped like lenses to form a triangle. The symbol, which has pagan roots, is often used as an architectural design in medieval buildings, art, Celtic knotwork, and in Celtic wedding and engagement rings. It’s also used by Celtic pagans as a symbol of triple deities like the goddess Morrigan, the goddess of battle, war and fate. The interlocking rings were believed to represent earth, sea and sky.

Eventually, the pagan symbol was adopted by the Christians to illustrate the Trinity: Father, Son and the Holy Spirit. So anyone getting a triquetra tattoo may want to convey their belief in “everlasting life.”

The Triskelion – a triple spiral shaped like a triangle. It’s found in older Celtic and Greek artifacts. It’s associated with the Greek goddess Hecate, the goddess of crossroads, light and witchcraft.

The fourth letter in the Greek alphabet, the uppercase delta symbol is a triangle. It now has multiple uses in math, science, finance, music, fraternity and sorority names, and even used in legal shorthand to denote “defendant.” This is a good simple triangle tattoo idea for those that work in these fields or belong to an organization that references the delta symbol. 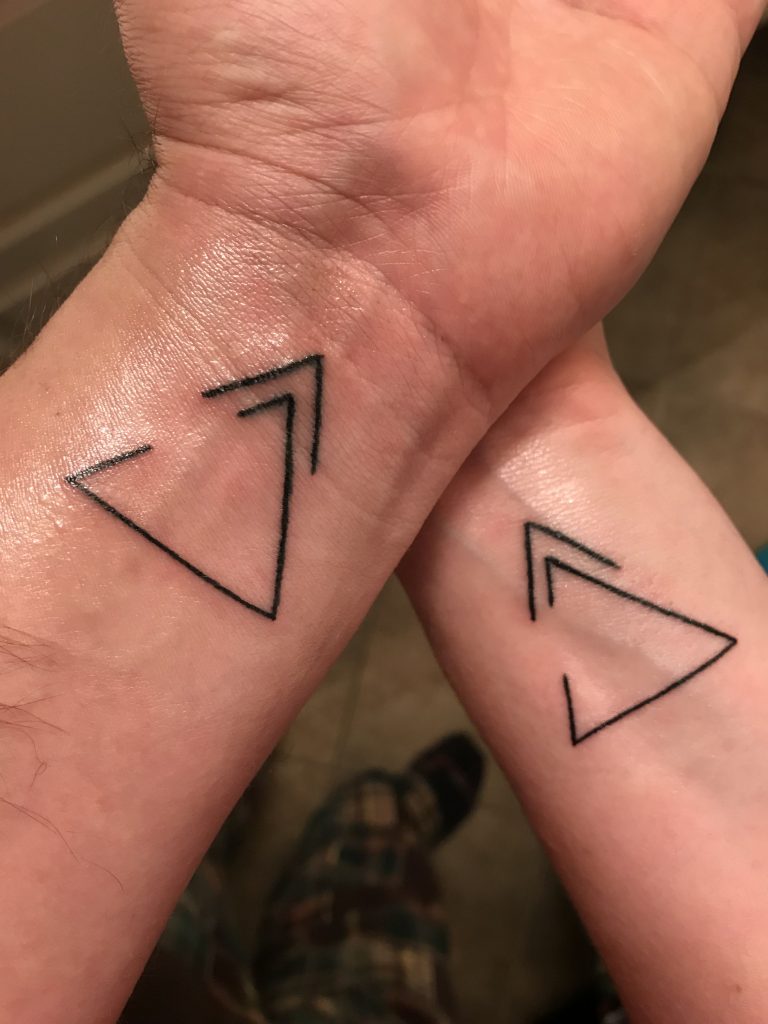 In Greek history, the delta symbol was also used to symbolize a doorway or a new opening. If you are entering a better phase in your life, using the delta symbol as a tattoo to commemorate it shows that you appreciate this opportunity for a better life.

If you’re planning on getting a simple triangle tattoo, the triangle’s orientation can have an effect on its meaning of masculinity and femininity.

A triangle pointing upward represents masculinity. If you look closely, it resembles and phallic symbol (like a sword), thus references men. It represents a strong foundation since, physically speaking, an upward pointed triangle has a wider base and better balance and has better stability. A triangle tattoo in this case also represents traits traditionally present in a man, like assertiveness and power. 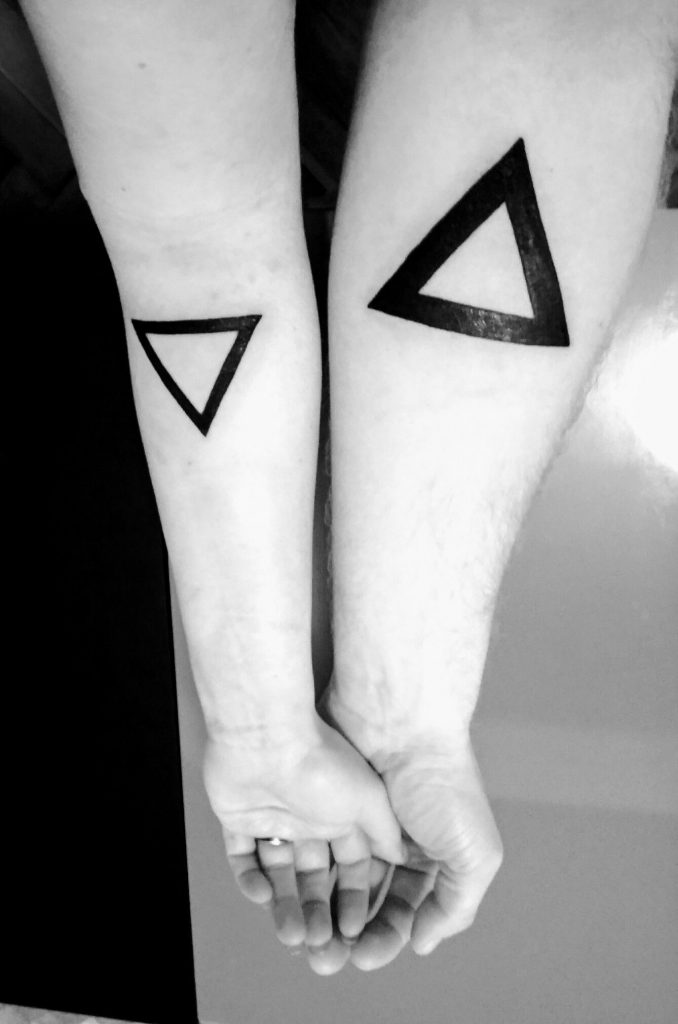 On the other hand, a downward-facing triangle represents femininity, in reference to a woman’s womb. This also represents passivity, shelter and motherhood.

Genderqueer people and those who do not conform to a cis-gender view may try to combine both masculine and feminine triangles, but this is not recommended. Combined, two triangles create the Star of David, which can be offensive to people of the Jewish faith.

An ancient Germanic symbol, Dragon’s Eyes are identified by a downward-facing isosceles triangle with a “Y” in the middle connecting the three corners of a triangle. The triangle is supposed to symbolize a threat, while the “Y” poses the choice between good and evil. 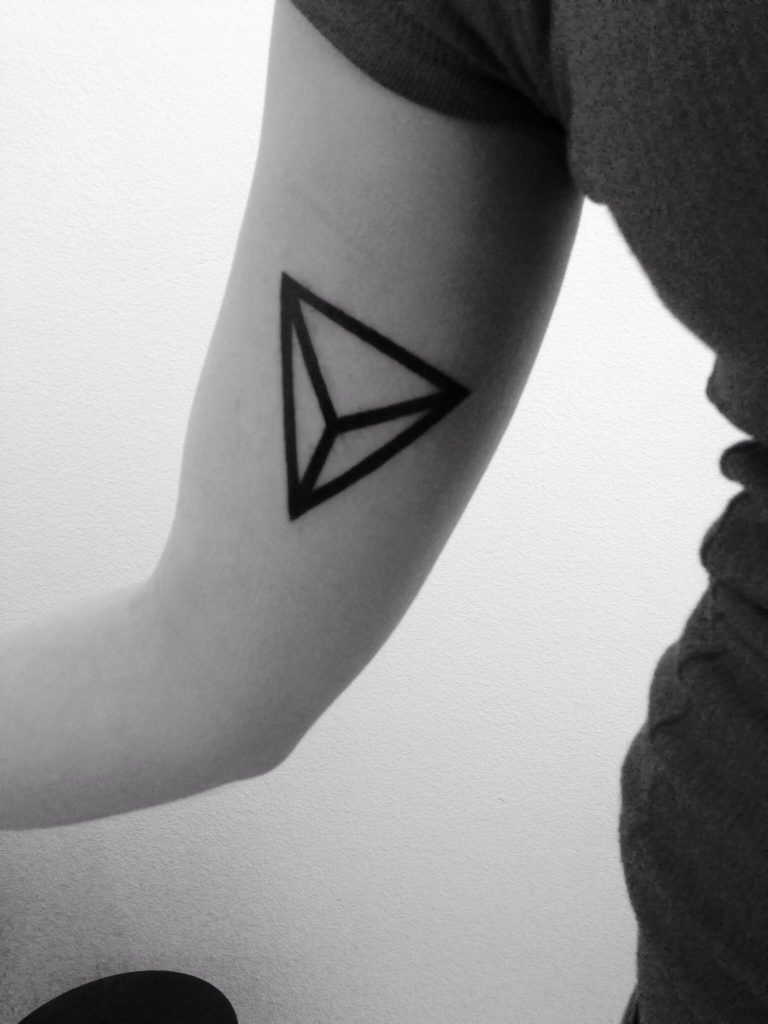 In the past, Dragon’s Eyes were used as a symbol of protection. It’s said that it’s associated with balance, love, power and wisdom to anyone who recited an incantation to the Dragon’s Eye.

So whether you opt for a simple black outline of a triangle or want to do something more creative (say, a lightning bolt tattoo made with triangles), there is a lot of meaning behind a triangle. Of course, with so many ways to interpret this shape, you might have a special meaning behind it, too.

What is the Meaning of the Triple Triangle Tattoo?

Sometimes one triangle isn’t enough. The addition of two more triangle tattoos not only makes this seemingly simple ink visually appealing but meaningfully complex as well.

If you’re into anything that has to do with Norse mythology, you’re going to dig valknut tattoo. It’s especially likable for its meaning. The three triangles symbolize fallen warriors: Vikings. The term is a combination of volr, which means slain warriors, and knut, which means knots. Germanic pagans used it to represent Odin’s power. During the 8th and 9th century, the three interconnected triangles were meant as burial gifts, and here’s where the connection to “life everlasting” links.

The three triangles can also mean reincarnation. If you’re a believer of rebirth as philosophy or religion, the vaulknut tattoo could be a good way to convey this belief. its design may even extend beyond the three triangles through colors and images that may also represent a kind of transmigration, like the tattoo of a phoenix, Bacchus or the ouroboros, which is a snake that eats its tail.

If you want something more delicate to go with your triple triangle tattoo, try a lotus blossom or a blue butterfly, both of which also symbolize rebirth.