Wolf Tattoo Meaning: What Does This Animal Tattoo Symbolize

Whether you consider yourself a lone wolf or a leader or a member of a pack, you’ve gotta admit wolves are ferocious beasts. With their powerful legs, a strong sense of smell and huge size, they’re not an animal you wanna come across as unprepared in the wilderness.

So a tattoo of these wild wolves are usually reserved for the free-spirited, ferocious and aggressive lot who see traits of themselves within these wolves.

But before you get inked with your own wolf tattoo, here are the meanings behind a wolf tattoo.

As “Game of Thrones” says, wolves survive in a pack.

Their physical features and behavioral characteristics suggest that wolves are meant to live in groups. A typical pack consists of a mated pair and their offspring; when one of the offspring reaches sexual maturity, it leaves the pack to find a mate and create a new pack.

Thus, wolves are often associated with family or loyalty, as a pack need each other to survive in the wilderness. There is the concept of the lone wolf (aka the matured offspring that go off to start their new pack), but if they take too long to find their mate and grow their own pack, they’re more vulnerable to other predators and natural elements.

Wolves are carnivores and usually feed on other animals in the wilderness. Because of their features, some types of wolves prey on animals bigger than them, especially larger herbivorous animals, like zebra and moose.

Wolves are the social butterflies of predators, meaning they survive through socializing with other wolves. But not just any wolves: the wolves they consider family. If you’re a lone wolf that happened into the territory of another pack, you’re probably going to get chased away.

These fierce beasts have many symbols and meanings over history and mythology. The Ancient Greeks associated wolves with Apollo, the god of archery, music, truth, healing and more.

But the Romans connected wolves with Mars, the god of war and agriculture. It was also said that the founders of Rome were breast-fed by a female wolf as babies, so it shows that wolves have a soft side for family despite their ferocity to those that threaten them.

The Dacians (an ancient Eastern European tribe) saw wolves as a noble creature that lorded over animals because it was the only animal that could defend against evil.

In the Native American Pawnee tribe, wolves were believed to be the first animals brought on Earth. When humans killed wolves, they were punished with death and destruction.

Chinese culture had negative views on wolves. They were associated with greed, cruelty, mistrust and lechery. This is supported by the Bible and other literary takes around the world that depict wolves as untrustworthy and evil creatures.

Wolves are strong and enduring, which is why these creatures can survive in cold tundras and in locations that most people cannot survive in. Their ability to thrive in the toughest condition can resonate with many, thus the popularity of wolf tattoos.

Not many people are born with a silver spoon in their mouths. Heck, even those who grow up in an average home may not have certain privileges or access to things most people take for granted.

Maybe you grew up in a family that was less than supportive of your goals. Or you feel like you’ve gone through hell and back because of your education. Or you’ve actually lived in a place that made you tougher, and a wolf tattoo is to remind you that if you can survive that place, you can survive anything.

Wolf packs act similar to the traditional nuclear family: you have a mated pair and their younglings that leave when they’re old enough to start their own packs. 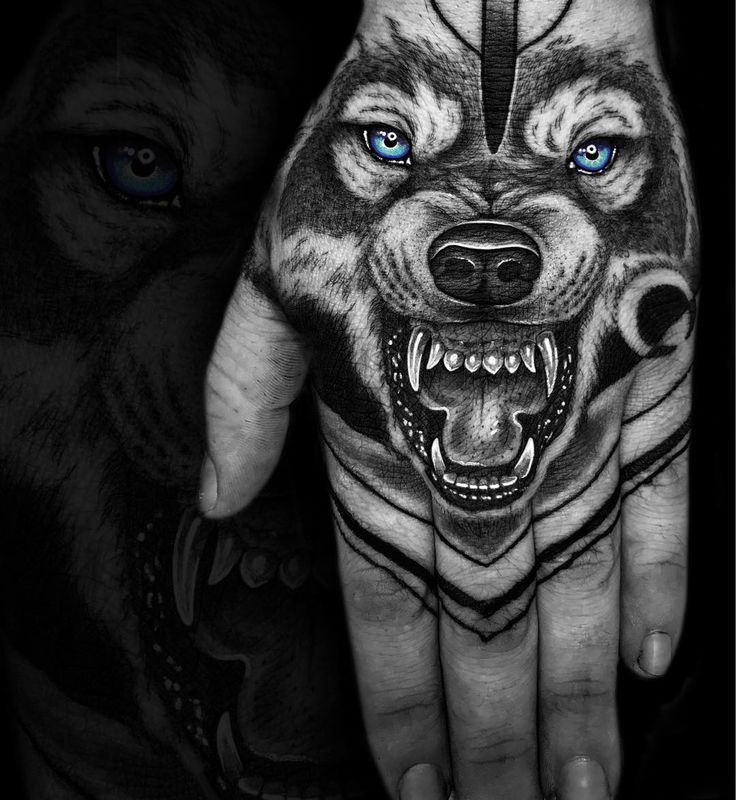 A wolf tattoo signifies strong family bonds. Wolves are built for surviving tough environments and taking down large prey, but only if they are with a pack. Like wolves, you care about your family and will always prioritize them before your own selfish needs.

And this isn’t just limited to your biological family: family also includes the family you choose: your non-biological friends, loved ones, neighbors and everyone you consider to be a part of your life that you’d want to protect.

Caution to the Wind

Despite their predatory instincts and ability to kill, wolves are cautious and only kill when necessary. When they feel like someone is an intruder to their territory or they need to feed, that’s when the claws come out and they become deadly.

But when it comes to their pack and their own well-being, wolves practice caution. They are strong and fierce, but they don’t jump into a fight when unnecessary. When wolves enter another pack’s territory marked by their scent, instead of trying to fight the pack, wolves opt to avoid the territory to avoid a fight.

You may consider yourself strong, but in that silent and unassuming type. Some may think it weakness, but you call it caution. You understand that strength and power is not attacking the first person you see and ending up in prison (and for that you may wanna consider a different tattoo for prison).

For you, strength means choosing your battles carefully. It means knowing when to walk away from a fight and understanding that it’s much better to diffuse a situation rather than escalate it. You are physically and emotionally cautious, and despite your strength you still choose peace.

Unlike their smaller relative, the domesticated dog, wolves are incredibly difficult to domesticate. Despite their links to dogs, wolves learn to socialize mainly based on smell, which is the first sense they develop as younglings. By the time they develop all their senses, anything that doesn’t smell familiar causes fear. And because of their size and predatory nature, being unfamiliar to a wolf can be dangerous. 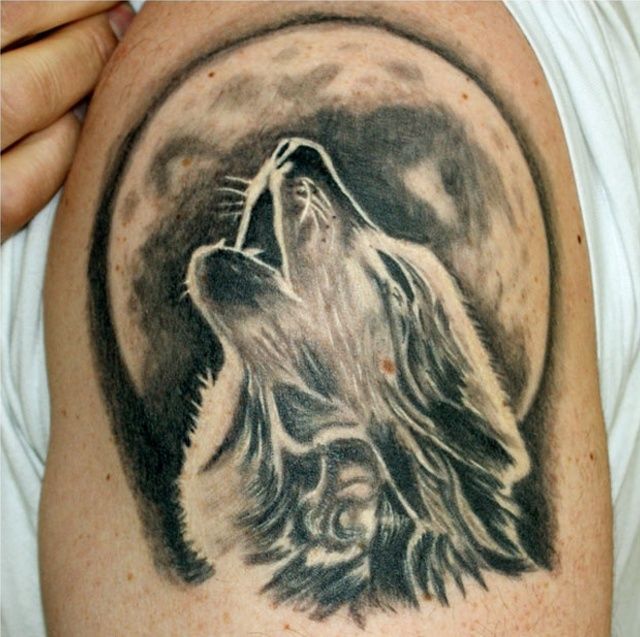 Dogs, on the other hand, learn to socialize after they develop all their senses. So even if they don’t recognize your smell or what you look like, it is possible to domesticate them.

So think of wolves as the wild child of the canine family. They run free, hunt, attack and live the way they want. You see yourself similarly: you’ve never been a stickler for the rules and now prefer to live a free and wild life doing what you want.

Wolves have managed to survive this long thanks to their sharp instinct for survival. They are not the beast to mess within the forests as they can perceive threats regardless of what that threat’s form can take.

Similarly, you have survived this long in life because of your own instincts. You know how to search a sea of false friends and keep close the few who will stand by you. You’ve made important decisions in life that had led to your own financial success. And, against all odds, you’ve survived storms and lived to tell the tale. 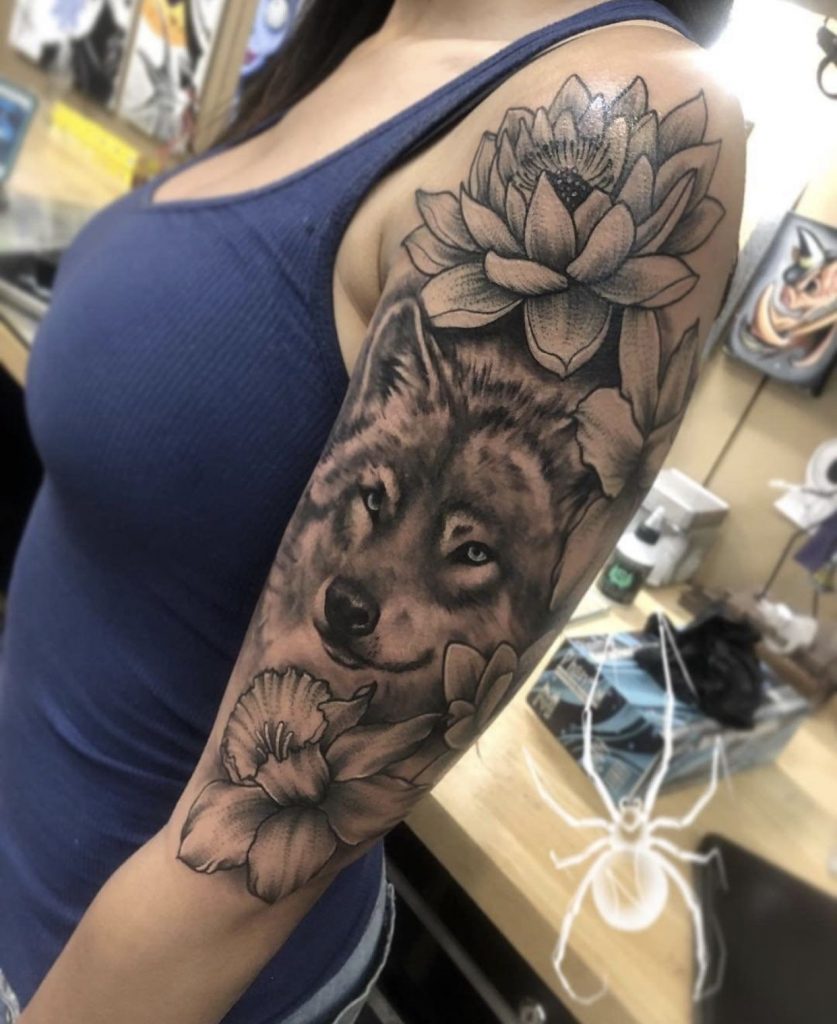 Should you choose the wolf as an animal tattoo, take heed that wolf tattoo designs are not for the faint of heart. It’s the perfect tribal tattoo to get whether you’re a boy proud of his ferocity and devotion to family or a girl who wants to show off her free spirit and sharp instincts.